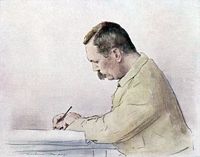 Sir Arthur Ignatius Conan Doyle (May 22, 1859 – July 7, 1930) was a British author and physician. A prolific writer, his work included historical novels, science fiction, poetry, plays, and non-fiction. He is, however, best known as the creator of the immortal Sherlock Holmes, whose fictional exploits helped popularize the new genre of detective fiction.

He was sent to Stonyhurst College, and further pursued his education in Germany, and at Edinburgh University where he graduated M.B. in 1881 and M.D. in 1885. He had begun to practise as a doctor in Southsea when he published A Study in Scarlet in 1887. Micah Clarke (1888), a tale of Monmouth's rebellion, The Sign of Four (1889), and The White Company (1891), a romance of Du Guesclin's time, followed. In 1891 he attained immense popularity by The Adventures of Sherlock Holmes, which first appeared in The Strand Magazine. These ingenious stories of the success of the imperturbable Sherlock Holmes, who had made his first appearance in A Study in Scarlet (1887), in detecting crime and disentangling mystery, found a host of imitators. The novelist himself returned to his hero in The Memoirs of Sherlock Holmes (1893), The Hound of the Baskervilles (1902), and The Return of Sherlock Holmes (1905). His later books include numerous novels; plays, The Story of Waterloo (1894),(1894), in which Sir Henry Irving played the leading part, The Fires of Fate (1909), and [[The House of Temperley]] (1909); and two books in defence of the British army in South Africa - The Great Boer War (1900) and The War in South Africa; its Causes and Conduct (1902). Dr Conan Doyle served as registrar of the Langman Field Hospital in South Africa, and was knighted in 1902.[1]

Despite his scientific training as a doctor (and the ruthless logic of the Sherlock Holmes character), Conan Doyle would, in his later years, publicly espouse a fascination with the supernatural, developing a belief in spiritualism and going so far as to write a book called The Coming of the Fairies. He famously accepted and promoted the Cottingley Fairies, where two schoolgirls, Elsie Wright and Frances Griffiths, produced photographs of fairies in their garden.[2]