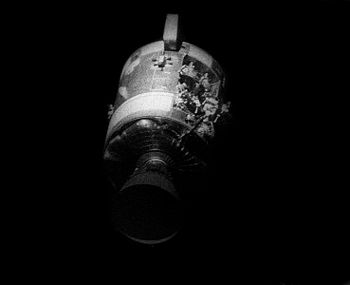 View of the severely damaged Apollo 13 Service Module after separation.

Apollo 13 was an unsuccessful mission of Project Apollo that was abandoned due to an on-board explosion while the craft was journeying to the moon. All crew members survived.

An Apollo spacecraft, configured for lunar missions, had three components:

In a normal mission, the Lunar Module, capable of landing on and taking off from the Moon, would undock and dock for the actual exploration mission. After the explosion, the crew used it in a contingency mode called Lunar Lifeboat Mode, in which resources aboard the LEM substituted for those in the SM.