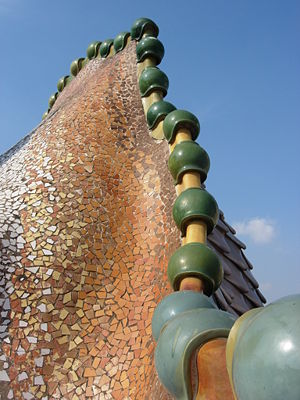 The ridge of the Casa Batllo, demonstrating Gaudí's delight for natural form and innovative use of materials. The dragon is the symbol of Barcelona, and here it find an expression upon a roof top.

Antoni Gaudí, 1852-1926, was a prominent architect considered to be the leader of the Spanish modernisme movement. he was born in Reus, Spain and died in Barcelona.

Born Antoni Plàcid Guillem Gaudí Cornet (which is Catalan - Antonio Gaudí in Spanish and sometimes in English) his works drew admiration from avant-garde artists for his surrealist style and unique designs.

Gaudí moved to Barcelona in 1868 to study architecture at the Escuela Técnica Superior de Arquitectura (Upper Technical School of Architecture).

He drew his influences from medieval works on architecture, as an interest in organic shapes and designs merged with orientalism during the Art Nouveau period. He was also influenced by the writings of John Ruskin, who theorised that ornament was the origin of architecture.

Modernisme, a movement particularly strong in Catalonia, should not be confused with the emergent Modernism of the 1920's, but was rather a turn of the century pan-arts movement closely akin to Art Nouveau.

In 1984 UNESCO declared seven selected Gaudi works as "an exceptional and outstanding creative contribution to the development of architecture and building technology in the late 19th and early 20th centuries." and inscribed them on its list of World Heritage Sites.[1] They were - Casa Vicens, Gaudí’s work on the Nativity façade and Crypt of La Sagrada Familia, Casa Batlló, the crypt in Colonia Güell, Parque Güell, Palacio Güell and Casa Mila.