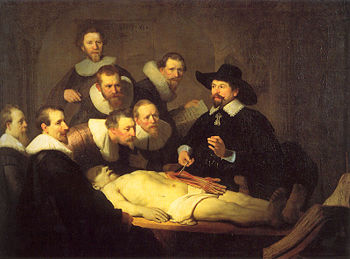 The Anatomy Lesson of Dr. Nicolaes Tulp is a well-known painting of the Dutch artist Rembrandt van Rijn. The original, dating from 1632, is in the museum Mauritshuis in The Hague, The Netherlands. The painting depicts a lecture in anatomy delivered by Dr. Nicolaes Tulp to a group of surgeons. The public lecture took place in De Waag (weighing house) in Amsterdam, which at that time possessed an anatomic theater. The painting is the first group portrait by the then 26-year old Rembrandt. Depicted are the surgeons: Jacob Blok, Hartman Hartmansz, Adriaan Slabberaan, Jacob de Witt, Matthys Kalkoen, Jacob Koolveld and Frans van Loenen, and of course, the lecturer Dr. Tulp.

The dissected body is that of the 28-year old Adriaan Adriaansz. (alias Aris ’t Kint), who had been hanged earlier that day (January, 1632) because of "grave assault and battery that endangered the life of a man whose cloak he had tried to take with the aid of another criminal".[1] The Amsterdam Surgeons' Guild allowed one public dissection per year and the body that was dissected had to be the remains of an executed criminal.

The painting was still in the possession of the Surgeons' Guild, when the Guild was dissolved in 1798 and the work came into the hands of the widow fund of the Guild. Twenty years later, in 1828, it was decided to auction the painting to support the widow fund with its proceeds.[2] However, the Dutch King Willem I prohibited its auction and instead ordered its purchase for his Koninklijk Kabinet van Schilderijen (Royal Gallery of Paintings), that was open to the public and had moved a few years earlier (1822) to the Mauritshuis. The painting was bought for 32,000 dfl. Since then it has been on display in the Mauritshuis.

Over the years the work has been subjected to several iconological studies. For instance, in Ref.[3] it is argued that Tulp requested Rembrandt to portray him as Vesalius reborn and that the book at the feet of the cadaver would be the 1543 De humani corporis fabrica of Vesalius. In 2006 the left lower arm of a cadaver of a 41-year white male was dissected and photographs were made of the different stages of the the dissection that were subsequently compared with the painting. It was found that the anatomical characteristics of the painting could not be reproduced. [4]