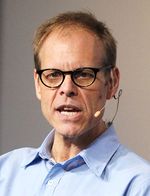 Alton Crawford Brown (born Los Angeles, California, July 30, 1962) is a well-known U.S. television personality and chef best known for his long-running show Good Eats seen on the Food Network. He has also been a television cinematographer. Good Eats mixes cooking, cooking techniques, and some of the science behind them in an highly individualistic way. As of May 2011, the show will end after 249 episodes, although several specials are planned.[1][2]

During his earlier career Brown was the director for photography for R.E.M.s music video The One I Love and has directed television commercials. As a cooking expert, he has written Alton Brown's Gear for Your Kitchen, I'm Just Here for More Food: Food x Mixing + Heat = Baking, Good Eats: The Middle Years, and Good Eats: The Early Years.

In addition to his own show, Brown is a resident food historian and commentator on Food Network’s Iron Chef America as well as being a host and judge for the reality series The Next Iron Chef.

His love of cooking is said to have started early in life after being guided by both his mother and grandmother in all things culinary before attending the New England Culinary Institute in Montpelier, Vermont.[3][4]