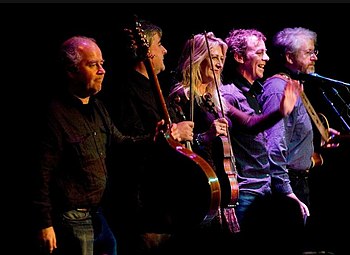 Altan are an Irish traditional music group, and they have recorded much of the music of their home, County Donegal. The fiddlers, Mairead Ni Mhaonaigh and Ciaran Tourish (and before him, Paul O'Shaughnessy) play in the Donegal style, which tends to be lively and staccato. The button accordion player, Dermot Byrne--and married to Ni Mhaonaigh--learned his style at the knee of many older fiddlers from the county. Prior to Byrne, the fiddlers played with Ni Mhaonaigh's first husband, Frankie Kennedy, on wooden flute; Kennedy died at an early age in 1994 of cancer. The accompanists, Mark Kelly and Daithi Sproule on guitar (the former for recordings, the latter for performance in the U.S.), and Ciaran Curran on bouzouki.