Alfred Marshall (1842-1924) was the most influential economic theorist in the English speaking world in the late 19th and early 20th centuries, and his approach to microeconomics remains influential. 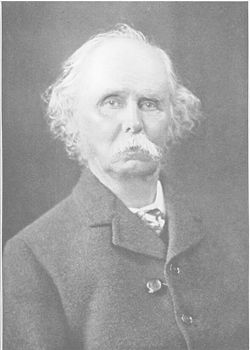 Marshall was born in Clapham, England, July 26, 1842. His father was a bank cashier and a devout Evangelical. He studied mathematics at St. John's College, Cambridge University and quietly became an agnostic. Marshall experienced a mental crisis that led him to abandon physics and switch to philosophy. He began with metaphysics, specifically "the philosophical foundation of knowledge, especially in relation to theology."[1]. Metaphysics led Marshall to ethics, specifically a Sidgwickian version of utilitarianism; ethics, in turn, led him to economics, because economics played an essential role in providing the preconditions for the improvement of the working class. Even as he turned to economics, his ethical views continued to be a dominant force in his thinking.

In 1885 he became professor of political economy at Cambridge, where he remained until his retirement in 1908. Over the years he interacted with many British thinkers including Henry Sidgwick, W.K. Clifford, Benjamin Jowett, William Stanley Jevons, Francis Ysidro Edgworth, John Neville Keynes and John Maynard Keynes. Marshall founded the "Cambridge School" which paid special attention to increasing returns, the theory of the firm, and welfare economics; after his retirement leadership passed to Alfred Pigou and John Maynard Keynes.

Marshall's chief work, Principles of Economics (1890) established his reputation. It appeared in 8 editions, starting at 750 pages and growing to 870 pages. It decisively shaped the teaching of economics in English-speaking countries. Its main technical contribution was a masterful analysis of the issues of elasticity, consumer surplus, increasing and diminishing returns, short and long terms, and marginal utility; many of the ideas were original with Marshall, others were improved version of ideas by W. S. Jevons and others.

In a broader sense Marshall hoped to reconcile the classical and modern theories of value. John Stuart Mill had examined the relationship between the value of commodities and their production costs, on the theory that value depends on effort expended in manufacture. Jevons and the Marginal Utility theorists had elaborated a theory of value based on the idea of maximizing utility, holding that value depends on demand. Marshall's work used both these approaches, but he particularly examined the factor of costs. He pointed out that, in the short run, supply cannot be changed and market value depends mainly on demand. In a period of intermediate length, production can be aided by existing facilities, such as buildings and machinery; but since these do not require renewal within this intermediate period their costs, which commonly are called fixed, overhead, or supplementary costs, have little influence on the sale price of the product. Marshall pointed out that it is the prime or variable costs, which constantly recur, that influence the sale price most in this period. In a still longer period, machines and buildings wear out and have to be replaced, so that the sale price of the product must be high enough to cover such replacement costs. This classification of costs into fixed and variable and the emphasis given to the element of time probably represent Marshall's chief contributions to economic theory. He was committed to partial equilibrium models over general equilibrium on the grounds that the inherently dynamical nature of economics made the former more practically useful. A second volume was planned but never written; it was to cover foreign trade, money, trade fluctuations, taxation, collectivism, and social goals.

Much of the success of Marshall's teaching and Principles book derived from his effective use of diagrams, which were soon emulated by other teachers worldwide.[2]

Marshall made important contributions through his exposition of the quantity theory of money and his distinction between the "real" rate of interest and the "money" rate. He was often called upon to give expert opinion to government commissions on all sorts of topics; some statements appeared posthumously in Official Papers by Alfred Marshall (1926). In 1890 he helped found the British Economic Association (later the Royal Economic Society) and the Economic Journal, the leading economics journal in Britain.

Marshall took a broad approach to social science in which economics plays an important but limited role. He recognized that in the real world, economic life is tightly bound up with ethical, social and political currents--currents he felt economists should not ignore. Marshall envisioned dramatic social change involving the elimination of poverty and a sharp reduction of inequality. He saw the duty of economics was to improve material conditions, but such improvement would occur, Marshall believed, only in connection with social and political forces. His interest in liberalism, socialism, trade unions, women's education, poverty and progress reflect the influence of his early social philosophy to his later activities and writings.