In many parts of West-Africa, there is an old chieftaincy tradition. The Akan of Ghana have developed their own hierarchy which exists aside the democratic structure of the country. The Akan word for the ruler is “nana”. In colonial times, Europeans translated it to “chief”, which is not equivalent. Other sources are speaking of “kings”, which is also not correct. The term “chief” has naturalized nowadays, though it would be more exact to use the Fante expression "nana".

The roots of Akan chieftaincy are unknown. Written sources are scarce. When the Akan were settling in the Tekyiman Region, i.e. before 1300, they already had the chieftaincy system for long. The Paramount Chief had a position which can be compared to that of an absolutist king.

When the republic of Ghana was founded in 1957, it was agreed that the chieftaincy system should be respected. When President Jerry John Rawlings came to power in 1982, the situation changed completed. In his 20 years long term of office, chiefs were prosecuted. When in 2001 President John Agyekum Kufuor was elected, chieftaincy was rehabilitated.

Chieftaincy is officially accepted. Politicians ask chiefs for advice because usually they are closer to the people. The highest committee is the National House of Chiefs in Accra. There are also Regional Houses of Chiefs. In case of problems between the chiefs, the House of Chiefs has a legal function.

The highest rank is that of a Paramount chief. Within the Akan people, there are different sub-groups, like the Ashanti or the Fante. The Ashanti have only one paramount chief, the asantehene. The present Asantehene is Otumfuo Osei Tutu II. Foreign guests of state usually visit the president and the Asantehene. The Fante have several Paramount Chiefs with very small territories. So the influence of the Fante Paramount Chief is comparatively small.

Underneath the Paramount chiefs, there are Chiefs and subchiefs. A subchief can be compared to the mayor of a village. The chiefs have their own territory, and apart from that, they have a function at court. Most of the functions are traditional, some have been created recently:

A chief arbitrates and decides political and economical questions in his area. When he is installed, is receives a stool name. Usually, all chief on one stool have the same name – a number is added.

Omanhene
The English version of the title Omanhene is "Paramount Chief". The Omanhene of Nkusukum is one of five Paramount Chiefs in the Mfantseman District. His seat is Yamoransa and he has the highest rank amongst all Nkusukum chiefs.

Gyasehene
"Gyase" means "kitchen" and Gyasehene is the one who is responsible for the well-being of Omanhene. Visitors have to book an appointment with Omanhene through Gyasehene, who controls and organizes the visits. Gyasehene is the function which is closest to Omanhene.

Obaatan
Obaatan" means "parent". His symbol is the egg out of which all other chiefs came. He is Omanhene's counsellor. When Omanhene's stool is vacant, Obaatan suggests the next candidate.

Tofuhene
The "warrior" is the head of the Asafo companies.

Adontehene
There are four positions describing military flanks. Adontehene is the one who goes in front of the army.

Nkyidom
Nkyidom is the last going. He collects the soldiers who are left behind and sends them back to the army. During Odambea, Nkyideom always sits in the last palanquin.

Akyampimhene
If there is anything to distribute or to share, Akyampimhene has to do it.

Mankrado
Mankrado's function is purification. He puts leaves into the water which he sprinkles over omanhene. He always has salt in his pocket to make things taste better for Omanhene.

Guantuahene
The function of Guantuahene is younger than ten years. Guantoahene is the one people can turn to for shelter and mercy.

Nsumankwahene
Nsumankwahene watches the oracle. This function is also younger than ten years.

Nkosuohene
Nkosuohene is responsible for the development of the region. The title is in use since about ten years and was adopted from the Ashanti who had made it up before. This title was created to honour someone who does not have to be member of a royal family. There are some foreigners who have been honoured with this title.

The most important person in the chief´s entourage is the priest or priestess (okomfo). Traditionally, the priest tells the chief when it is for example time to start a war or to marry.

There is also a stool wife. No matter if a chief is married or not, when installed, he will be married to a very young girl. Nowadays, it is not obligator, though polygamy is still legal. Today, the symbolic act is sufficient: During parades, a stool wife is sitting in front of the chief.

A chief has one or more linguists (okyeami, sg.). A chief never talks in public, but conveys messages through his linguists who is also responsible for the pouring of libations.

The title of Queen mother can relate to the rank of a paramount queen, a queen or a sub-queen. The Akan name is the same as for the men, “nana”. When using English, Ghanaians say “queen mother”. This woman is not necessarily the respective chief`s mother. Her role in the system is to have an eye on the social conditions. 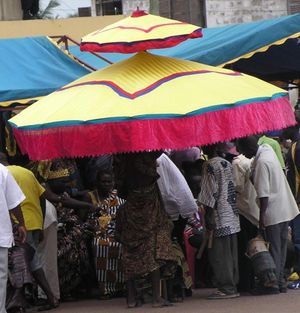 Personal Ornaments
On occasions, chiefs wear the traditional cloth, which is a six yards long piece of fabric, wrapped around the body. Female chiefs have two pieces of fabric which can be of different design.
The jewellery is very ample and used to be of gold. Nowadays, most chiefs are wearing imitations. The Head-Dress usually has the form of a crown. It can be made of metal or of black velvet, ornamented with metal. Chiefs have traditional sandals, and the wearing of sandals is symbolic. When a chief abdicates, he puts off his sandals.

Fly-whisk
When riding in a palanquin, chiefs hold a fly-whisk in one hand and a ceremonial sword in the other. The fly-whisk is made of animal hair.

Sword
The ceremonial short sword is used for animal sacrifice. The chiefs touches the animal`s throat symbolically with his sword before someone else cuts the throat with a sharp knife.

Palanquin
During a Durbar, which is a special parade, some chiefs are carried in a palanquin. Subchiefs have to walk. The palanquins can have the form of a chair or of a bed.

Stool
Instead of a throne, Akan Chiefs are sitting on a stool. When they die, their stool is painted black and stored in a sacred room.

Umbrella (Bamkyim)
Very big umbrellas made of silk and other rich fabrics show from afara that a chief is coming.