An Ajax framework is a cross-browser framework or library that assists developers in the creation of rich internet applications, that use Ajax.

Ajax frameworks consist of libraries written in either client-based Javascript or nearly any server-based programming language to construct web applications through the Ajax engine, i.e. the suite of technologies that facilitates communication between client web browser requests and server without re-loading an entire page. Ajax can provide more interactivity to web applications and can improve their overall functionality. These frameworks are mostly free, and the majority of them JavaScript libraries of functions that simplify and standardize Ajax techniques.

Jesse James Garrett wrote an article for his company Adaptive Path entitled “Ajax: A New Approach to Web Applications” where he coined the word Ajax and defined its components and goals. In it, he describes the discrepancy between desktop applications and web applications. The impetus behind Ajax was to provide web pages with the technology to make them as rich and responsive as desktop applications. The most powerful real-time manifestation of this responsiveness is how Ajax technologies don’t require complete web page reloading every time a new request is made or new data is entered. Garrett defines Ajax as many existing technologies powerfully coming together to create a new user experience.

Classic examples of this type of framework are Prototype and JQuery. As is suggested by JQueries tagline "The Write Less, Do More Javascript Library", these frameworks attempt to add tools to a designers resource kit to simplify and standarize the javascript required to perform Ajax type actions.

Toward the goal of 'simplifying' these frameworks typically provide syntax that is reasonably cross-browser and future-proof. That is as new browsers are released and new vulnerabilities are discovered in older Ajax techniques, users of these frameworks should be able to simply update their framework library files with no or little modification to their original code.

Toward the goal of standardization, the adoption of these frameworks makes it relatively simple for an new programmer to walk into an existing project and make sense of the code.

The types of methods included by these frameworks can loosely fall into 4 categories.

These libraries generally include a call-back system that attempts to simplify the creation and execution of HTTPXMLRequest objects and to simply the handling of a returned XML, JSON or (X)HTML response. A number of method signatures from JQuery are used in this section and the following sections. This is simply to illustrate the types of features that these frameworks add to traditional Javascript programming. Most other major frameworks, such as Prototype and ExtJS provide similar methods.

"Event Handling" methods add generally add the ability to attach new actions to DOM elements. The following is a sample of the "Events" available from the JQuery Framework.

These frameworks will also include code to assist in CSS and DOM searching, parsing and selection. The best way to explain these are probably just through examply JQuery inlcudes the following events:

Once again an example of visual effects is probably most helpful. JQuery includes the following:

The types of frameworks provide a complete GUI authoring environment. They tend to feature things like Layout Managers, Window, Frames, Progress Bars, multiple types or buttons and other feature that users would expect in a more traditional desktop GUI toolkit.

There are two approaches to this type of framework, some require and are tightly integrated with a Supplement Framework. Others provide a the complete package of GUI and Ajax tools in one package. Script.aculo.us is an example of the former since it requires and integrates well with the Prototype framework. ExtJS is an example of the latter, since it is one package that provides both types of functionality.

These types of technologies are usually a component of a particular server technology that is generally used to generate (x)html/css and interact with a back-end database. These techologies includes Microsoft's .NET platform, Sun's Java, as well as open source technologies such as PHP, Python and Ruby.

Microsoft's ASP.NET AJAX is one of the more ambitious server technologies in that it allows developers working with Visual Studio 2008 and the .Net 3.5 platform to use a subset of Microsoft's graphical control to 'compile' an Ajax driven website. It must be mentioned that, at least as of August 2008, the number of controls available to ASP.NET AJAX is very limited. Generally users cannot simply recompile a desktop program for an Ajax target, but rather most project must be specifically designed for the ASP.NET AJAX platform do to it's current limitations.

On the other end of the server technology spectrum are projects like SAJAX which was originally a relatively simply PHP library that gives PHP programmers the ability to handle the XMLHttpRequest objects in their PHP code with having to handcode Javascript handlers. SAJAX has now been ported to both Perl and Python[5]

A third variation on the server-side theme are the MVC frameworks that follow the Ruby on Rails MVC concept. Many of these frameworks, such as Rails, itself and Symphony for PHP, have integrated Ajax methods. Often these MVC frameworks will provide method that 'wrap' calls to one of the Javascript library frameworks such as JQuery or Prototype.

The biggest difficulty with this type of framework is that if a developer requires a feature that is not explicitly included within the framework, extending the framework can be extremely difficult and require detailed know of both target platforms and the underlying server technology.

Some of the most popular and interesting Ajax frameworks are:

These results depict the most popular answers the to the question, "I mostly use the following Ajax frameworks, toolkits, or JavaScript libraries:" which was answered by 2618 developers in mid-December 2007. [6][7] 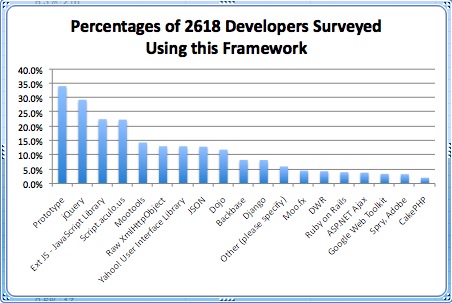 According to an early 2008 survey of developers by Nitobi, 570 developers were surveyed and they answered this question "What toolkits or frameworks are you using in your projects?" in the following ways: 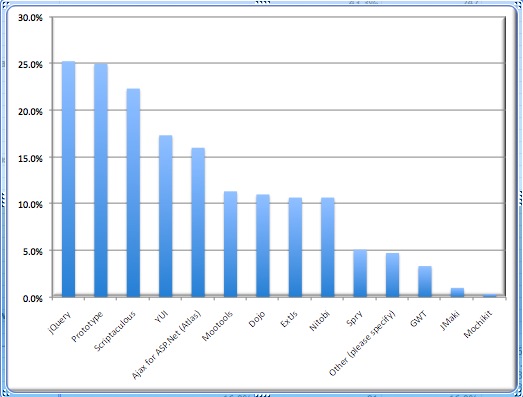