An affordance is a feature or control which provides a signal as to how an object is supposed to be controlled or manipulated. By guiding the user to the correct operation, affordances reduce the need to explain how to use something.

Affordances suggest both operations and restrictions on those operations. For instance, the shape of something meant to be held in a hand may make it comfortable to hold only in a certain way, thus guiding the hand to the correct placement. Every type of control has an intuitive operation (in the usability sense of being commonly understood, rather than instinctively known) associated with it.

Where there are no affordances, even everyday objects can become confusing and difficult to use. For instance, consider a set of drawers with no handles. How do you open them? When there are handles, no one give a second thought to it. 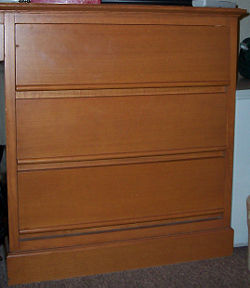 © Photo: Petréa Mitchell
How do you operate these drawers? 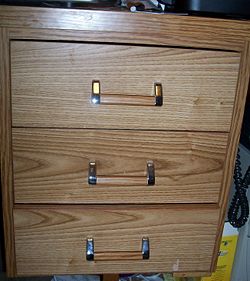 Another common example is the door which is meant to be pushed from one side and pulled from the other, but has identical handles on either side. Often, having to provide labels for simple operations like "push" and "pull" is a sign of an affordance failure.