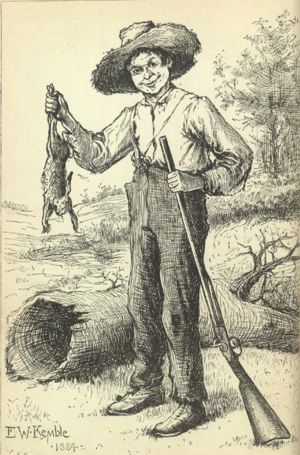 Huckleberry Finn, as drawn by E.W. Kemble, from the 1884 first edition.

Adventures of Huckleberry Finn (1885) is widely regarded as Mark Twain's masterpiece and one of the great American novels of all time. Ernest Hemingway famously said that: "All modern American literature comes from one book by Mark Twain called Huckleberry Finn." To which Kurt Vonnegut, Jr. added: "This is at least vaguely true, I suppose, of many modern books written by American men."[1]

It is a sequel to The Adventures of Tom Sawyer, with which it shares several characters, but whereas Tom Sawyer can be seen as a children's book, Huckleberry Finn presents adult life along the banks of the Mississippi as seen through the eyes of a boy who is naive but shrewd, observant, feeling, and good-hearted. This enables the author to paint a vivid picture of different aspects of the society of the region and of human nature. The effect is usually humorous, often satirical, occasionally tragic.

There have been disputes about Mark Twain's use of the word "nigger", a word freely used by Huck, who is the narrator, using the language of his time and society.