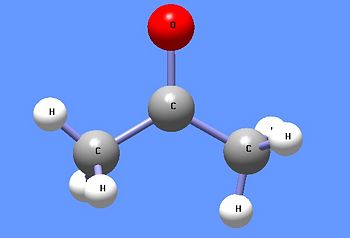 -ketopropane, dimethyl ketone or dimethyl ketal), is an aprotic colorless solvent widely used in organic chemistry reactions and the main ingredient in many fingernail polish removers. Because it has a medium-high dipole moment it can be used for organic reactions in which ionic reagants are used or in which ionic reaction intermediates are produced. Nucleophilic reactions proceed faster in acetone, compared to alcohols, because anions are less well solvated. Acetone is miscible with many compounds including water, alcohols, ethers and many other solvents.

= 20.7). The presence of a central carbonyl group, with only one carbon on each side, makes it the smallest ketone. Its high dielectric constant means that it can separate ionic charges fairly well. Acetone has a very high vapor pressure, is flammable and boils at 56.5 Celsius. Although acetone has two possible forms, the keto- and the enol-forms (see figure), the keto- form is greatly favored for acetone.

Acetone is often the main ingredient, along with acetonitrile, in fingernail polish removers, although its use is being faded out due to environmental concerns. It is also used as a degreasing agent and glassware cleanser. Superglue and many epoxide mixtures use acetone as the solvent. Because water is an azeatrope when acetone evaporates, it can be used as a drying agent.

The oxygen atom of acetone has two lone electron pairs that can be shared with Lewis acids, and thus is a Lewis base. Lewis acids such as AlCl3 or BF3 can form complexes with acetone in which the metal atom shares some of the oxygen atoms electron pairs. The resulting partial positive charge on the carbonyl oxygen atom is stabilized by a resonance structure in which the carbonyl double bond becomes a single bond and donates electrons to the oxygen. As a result, the carbonyl carbon atom becomes partially charged and becomes more electrophilic. Protonation of the carbonyl oxygen also enhances the electrophility in a similar manner.

Acetone can also function as a very weak acid, with a pKa of 19. When a base removes one proton from either of the non-carbonyl carbons of acetone, a carbanion is produced in which one of the carbon has a negative charge. This structure has a resonance form, an enolate ion, in which a double bond is formed between this negative carbon and the carbonyl carbon, the C-O bond becomes a single bond, and the negative charge is placed on the oxygen atom. This is the deprotonated enol form.

-unsaturated ketone 4-methyl-3-penten-2-one, or with other carbonyl compounds.

Organometallic reagents, such a Grignard reagents or organolithium reagents, can also be used as nucleophiles to react with acetone. For example, R3C-MgBr, a Grignard reagent, can react with acetone to produce the tertiary alcohol R3C-C(OH)(CH3)2. The formation of new carbon-carbon bonds in such a manner is critical to the synthesis of many complex organic molecules.

Acetone behaves very differently in the presence of halogens in basic solutions. Rather than becoming halogenated, methyl ketones are oxidized to a carbonylic acid in which the methyl group has been removed. The reaction of acetone with excess iodine (I2) and sodium hydroxide (NaOH) yields sodium acetate, Na+ : [H3CCO2]-, and triiodomethane (iodoform), CHI3, an antiseptic agent commonly used in hospitals.

Both the liquid and vapor phases of acetone are extremely flammable, with a flash point of -20C. It is also a severe contact hazard. Excess exposure can lead to coughing or unconsciousness. Contact with eyes may lead to perminent damage.