This article is about Acer palmatum. For other uses of the term Tree , please see Tree (disambiguation). 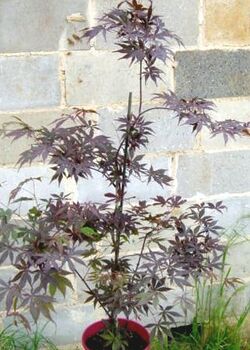 Acer palmatum is a well-known deciduous tree commonly called the “Japanese Maple”. It is very popular among homeowners, gardeners and horticulturalists and is believed to have been in cultivation for over three hundred years.

The latin name Acer palmatum comes from the similarity between the shape of the leaves and the shape of a human hand. The common name “Japanese Maple” is a bit confusing because the species Acer japonica and Acer nipponicum exist as well, and, as their names imply, they, like many maples or acers, also originated in Japan. In addition, some of the varieties of these species (and many of the other acers) look so similar that they could easily be mistaken for varieties of one of the others. Although most references restrict the use of the name “Japanese Maple” to “acer palmatum” it is infrequently used to refer to Acer japonica as well. The situation is a confusing one. 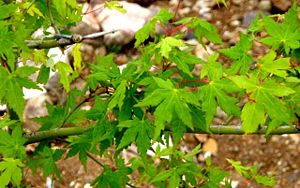 (CC) Photo: Aleta Curry
Acer palmatum foliage in spring.
Acer palmatum is frequently planted as a specimen tree and makes a good subject for bonsai. They are prized because they have year-round interest: bare stems in winter; delicate foliage in changing tones in spring, and beautiful hues in autumn. In addition, some, like those of the A. palmatum dissectum group, have extraordinarily shaped leaves and colour. Further, they are difficult for the novice to propagate, and this adds to their value.