Abraham Maslow (1908-1970) was an American psychologist, often credited with starting the "third force" of humanistic psychology, in contrast with Pavlov's behaviorism and Sigmund Freud's psychoanalysis. [1]

He began studying monkeys, working with Harry Harlow. An experiment indicated that a baby monkey would prefer affection over food.

In 1937, he began to teach at Brooklyn College, City University of New York, and produced some of his best-known work. During this time, he said he was inspired by colleagues including the anthropologist Ruth Benedict and Gestalt psychologist Max Wertheimer, whom he was to regard as models of "self-actualizing" people operating at the highest level of human consciousness. Earlier researchers such as Freud had focused on illness, while Pavlov looked for actions dictated by other than conscious choice. Maslow, however, was interested in the optimal, conscious capabilities of people.[2] 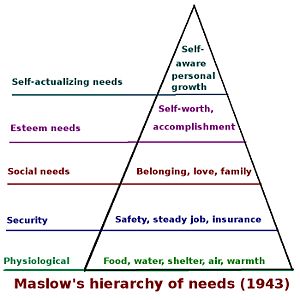 (PD) Sketch: Thomas Wright Sulcer
Maslow proposed that basic needs must be met first before higher–level needs could be realized.

He proposed the hierarchy of needs model in 1943 in a paper entitled A Theory of Human Motivation, which assumed people had a hierarchy of needs, and that it was necessary for the basic needs to be fulfilled first before advancing on to more sophisticated needs.

At the lowest level were physiological needs such as water, food, air, sleep had to be met before more higher–order needs. Even within the level, there was a hierarchy; lack of oxygen is more basic than thirst.

The next level was security

Social needs (love, affection) are associated with interaction and companionship, while self-esteem needs dealt with the quality of those relationships.

The highest needs he termed self–actualizing needs and described people who are self–aware, concerned with personal growth, less concerned with the opinions of others or the crowd, and keenly interested in fulfilling their potential. What characterized fulfilled people? He characterized self-actualized people as having:

In 1957 and 1958, Abraham Maslow and Clark Moustakas, convened meetings, in Detroit, for psychologists interested in the "healthy" model of psychology. This led to the formation, in 1961, of the American Association for Humanistic Psychology, sponsored by Brandeis University.<ref>{{citation