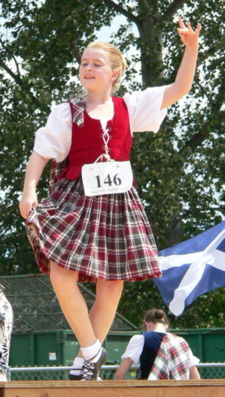 An example of the Aboyne dress. The dancer is competing in the National dance portion of the Highland dancing competition at the 2007 Skagit Valley Highland Games.

The Aboyne dress is the name given to the prescribed attire for females in the Scottish national dances, such as the Flora McDonald, the Highland lilt, and others. There are actually two versions of the Aboyne dress in use.

The name derives from the Aboyne Highland Gathering in Scotland where, years back, the dance committee, dissatisfied with the state of affairs of female Highland dance attire, prescribed new rules governing acceptable attire for the female dancers. The problem, as they saw it, was that many felt that the female and male dancers should not be wearing the same outfits and that a separate style for females should be developed. The men would continue to dance in kilt and jacket, wearing bonnets and sporrans.

The original decision of the Aboyne committee applied to both the Highland dances and the National dances. This was modified by the Scottish Official Board of Highland Dancing (SOBHD) a few years later so that the Aboyne dress would be used by females for just the national dances with a different, kilt-based outfit (though with no bonnet or sporran for females) for the Highland dances. To this day, however, the wearing of the kilt by females is strictly forbidden at the Aboyne Gathering.