On 10 April 2010, a Tu-154M aircraft, operated by the Polish Air Force, crashed at Smolensk, Russia, killing all 96 on board, including Polish president Lech Kaczyński.[1] The delegation was on its way to a memorial service commemorating the 1940 Katyn massacre of thousands of Polish leaders by Soviet Organs of State Security.

The crash was a shock and caused a great loss for the Polish people, a tragedy that was linked to another — though quite different — tragedy, the World War II mass murder. Because of this connection, the term Katyn-2 is sometimes used for it.[2] 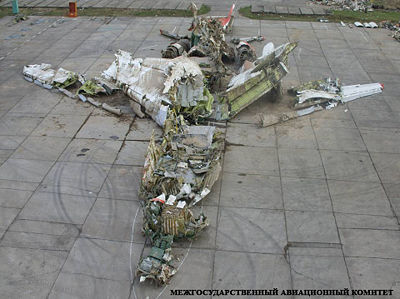 Wreckage of the Tu-154M collected after the crash for the investigation—Photograph by the Interstate Aviation Committee, May 19, 2010

Officially, the crash has been declared to be a result of an accident.[3] As of the summer of 2010, however, the precise cause of the accident on April 10 in Smolensk of the Tu-154M, which had Polish politicians including President Lech Kaczynski aboard, has not been determined although various conjectures have been raised. It is not unusual for an aircraft crash investigation, however, to take months to years.

Tu-154 aircraft have a high accident rate compared with other airliners (e.g., one fatal accident for every 431,200 flights; Boeing 737 one fatal crash for each 2.68-million flights.[4]

The data about the military "Ilyushin-76" that come but did not land are not available; its trajectory is not known. The aircraft of such class can be equipped with the meconing systems, with the tail guns and/or with the tank for several tens of tons of liquid. In addition, the wake turbulence of such a heavy jumbo is sufficient to drop down any passenger jet if it follows too close.

In the blogs, it is discussed that the airport was not equipped for the landing of airplanes at poor visibility, that the smog just above the airport was artificial, that the landing devices (lights) were dismounted just before the crash (and recovered just after the crash), that the dispatcher in the airport gave to the pilot wrong value of the atmospheric pressure, that the dispatchers confused the Tu-154M with another airplane (Perhaps, Ilyushin-76) and continued to "see" the Tu-154M at the locators during 15 minutes after it crashed, that the FSB agents associated to the airport used to kill and robe the survivors. Such opinions are based on the publications mentioned in the bibliography.

The pilots were accused of having poor qualifications:

Weather was in general good; but the visibility was reported become poor after the arrival of the Ilyushin–76, and just in the area above the airport; and the smog disappeared soon after the crash. No satellite maps of the region during than morning is available. According to the transcript of the conversation of the pilots with dispatchers, the dispatchers did not know the air pressure in the airport; so, the pilots could not use the barometric altimeter.

Katyn-2 is a shorthand term for the crash of an airplane carrying a high-ranking delegation of Polish politicians and military, headed by the Polish president Lech Kaczyński, on April 10, 1910, near Smolensk in Russia. All 95 people aboard were killed.

The time of the crash is disputed and several estimates have been suggested. First, the Smolensk regional governor Sergei Antufiev reported that the crash happened at 8:56am.[5] This information was reproduced in many mass media reports as well as at the funeral ceremony. However, the next day (April 11), another estimate of the time of the crash was suggested by the prosecutor of the investigation committee. He told that the crash happened at 10:50 a.m. (2:50 a.m. ET).[6] After a month, the official version of the time of crash had been changed yet again to 8:41am. The pilots made three aborted attempts to land beginning at 8:41am, which the official investigation set as the time of the crash.[7][8]

The altitude at which the aircraft broke up is also disputed. The dispatcher had confirmed that the airplane should follow the glissade.[9][10] If so, the aircraft broke up at an altitude of a hundred meters, which would explain also the death of all the passengers and crew. On the other hand, the Russian official investigation group claims that the airplane broke apart at an altitude of few meters, at the level of the trees.

There is call for an international investigation of the case.[11]

The discrepancies in the number of the landing attempts[7][12], the 15-minute discrepancy in the time of the crash (which would be required if the plane was attempting two "additional" abortive attempts to land), as well as the disappearance of the records of the ground monitoring of the flight and other peculiarities in the official version of the crash have initiated doubts in the honesty of the official Russian investigation group.

At least for year 2011, the key questions about the catastrophe remain unanswered:

Why there are so many so different estimates about the number of the landing attempts precedent to the crash?

Why there are so many so different estimates about the time of the crash?

Where are the records of the ground monitoring of the flight? Why they were not published?

Where are the records of the parameters of the flight by the on–board emergency recorders? Why they were not published?

What value of the atmospheric pressure at the airport did the dispatcher say to the pilots of Tu-154M?

What kind of information did minister Sergey Shoygu used to insist that the Tu-154M crashed at the second attempt to land?

What about the military airplane Il-76 (Ил-76) that used to fly in vicinity at the moment of the crash? What is trajectory of that Il–76? Who used to drive that Il–76? What kind of equipment had been installed at that Il–76? How close was that Il–76 to the Tu-154M?

Why the emergency recorders and the wreck of the airplane were not returned to the Polish representatives?

The official investigation of the catastrophe did not reveal the sources of misinformation about the number of landing attempts, about the moment of crash. Neither the records of the trajectory of the Tu–154M, not that of the military Il-76 that flew in vicinity were published. Many people interpreted the failure of the research group headed by Vladimir Putin as confirmation of the accusation formulated very soon after the catastrophe and widely discussed in blogs.