The boundaries of modern Iraq and Jordan, subject to British geopolitical interests, were set at the Cairo Conference convened on 12 March 1921. Winston Churchill led the meeting, with a portfolio including air and the colonies. The political commissioner, Percy Cox, was a key figure, as well as Gertrude Bell and T. E. Lawrence. Kings were installed from the Hashemite dynasty, rivals to the House of Saud in Saudi Arabia. 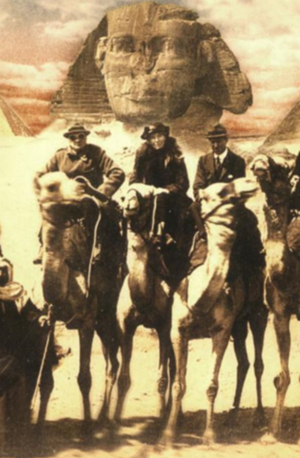 Churchill, Bell, Lawrence: 1921
A picture taken on 22 March, the last day of the Conference, shows some of the key participants.

...and the final opportunity for the British to determine the postwar future of the Middle East. Like any tourist, the delegation makes the routine tour of the pyramids and have themselves photographed on camels in front of the Sphinx. Standing beneath its half-effaced head, two of the most famous Englishmen of the twentieth century confront the camel in some disarray: Colonial Secretary Winston Churchill, who has just, to the amusement of all, fallen off his camel, and T. E. Lawrence, tightly constrained in the pin-striped suit and trilby of a senior civil servant. Between then, at her ease, rides Gertrude Bell, the sole delegate possessing knowledge indispensable to the Conference. Her face, in so far as it can be seen beneath the brim of her rose-decorated straw hat, is transfigured with happiness. Her dream of an independent Arab nation is about to come true, the choice of a king endorsed: her Iraq is about to become a country. Just before leaving the hotel that morning, Churchill has cabled to London the vital message "Sharif's son Faisal offers hope of best and cheapest solution.[1]

Bell and Cox were given the job of drawing the boundaries of Iraq to suit British interests. [2] Perhaps foreshadowing modern conflicts, they did not pay strong attention to the potential Islamic sectarian conflict between Shi'a and Sunni.In early 2004, David Ignatius wrote in the Washington Post about the offer of Prince Hassan of Jordan, the great nephew of Faisal, to mediate among Iraqi religions factions to bring them together and become a "provisional head of state."[3]

Those interests balanced needs for oil, promises to Arab and Zionist allies against the Ottomans, balancing the Hashemites with the House of Saud, and other complex issues. Kurdish nationalism was considered.[4]