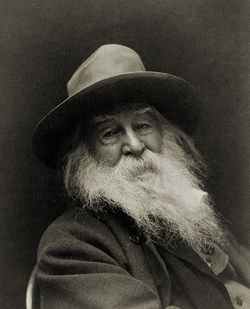 Walter Whitman (May 31, 1819 in West Hills, Long Island, New York - March 26, 1892 in Camden, New Jersey) was an American poet, essayist and journalist, now considered to be one of the founders of modern American poetry. His most famous work is the poetry collection Leaves of Grass, which he wrote in free verse.

Whitman was the prototype of the American self-made man. He started as an office boy in a law firm, worked a while as a printer, then as a village school teacher, founded several magazines, built houses, and meanwhile continued working on his magnum opus, Leaves of Grass. Whitman never married, never left America, never sought after wealth and property, did not belong to any club, preferred the company of ordinary people and was always optimistic and cheerful. People who knew him well described him as slow moving, tolerant, democratic, responsive, and generous to everyone.

Whitman's best known work is Leaves of Grass. He continued editing and working on it until his death. This masterpiece of American literature is still considered his most personal and political work. A group of those poems about the Civil War is sometimes published separately under the title Drum-Taps. The first edition was self-published and received only moderate attention from the public. In several poems Whitman glorifies the human body in a very innovative style, and this did not exactly fit in with the Victorian ethics of the time. Despite its revolutionary content subsequent editions failed to get noticed in the United States. Outside the U.S.A. the reception was much better, especially in France, where Whitman's humanism influenced the naturalist literary movement. By 1865, Leaves of Grass had made Whitman famous and was now accepted by a major publishing house.