USS Alhena (AKA-9) was an attack cargo ship named after Alhena, a star in the constellation Gemini. Commissioned as (AK-26), she was redesignated (AKA-9) eighteen months later. Alhena served as a commissioned ship for 5 years and 4 months, earning five battle stars for her World War II service.

Laid down as Robin Ketiering under a Maritime Commission contract (MC hull 74) on 19 June 1940 at Sparrows Point, Md., by the Bethlehem Shipbuilding Corp.; launched on 18 January 1941; sponsored by Mrs. William Sanford Lewis; purchased by the Navy on 31 May 1941 from the Robin Line of the Seas Shipping Co., Inc., of New York City; commissioned as Alhena (AK-26) at Hoboken, N.J., on 15 June 1941, CDR Charles B. Hunt in command. Following final fitting out and shakedown training, the cargo ship began operating among ports on the East Coast of the United States. The ship arrived at Boston on 13 December to take on cargo for Argentia, Newfoundland. She completed her run to that port by the end of December and then proceeded to Brooklyn, N.Y., to refill her holds.

She picked up more cargo at Norfolk, Va., in mid-January 1942 and returned to New York City to embark troops before getting underway on 5 February for Europe. On the next day, the ship was officially assigned to the Naval Transportation Service.

After touching at Halifax, Nova Scotia, Alhena reached Belfast, Northern Ireland, on 27 February and remained there for approximatey two weeks discharging her passengers, equipment, and supplies. She made a stop at Clydebank, Scotland, on 14 March and sailed two days later for the United States. The vessel reached New York on the 25th. The ship departed the east coast on 9 April, bound for the Canal Zone; transited the canal on the 19th; and set her course for the Tonga Islands. She reached Tongatabu on 9 May; landed Army and Navy personnel; left that island two weeks later; and arrived at San Diego, Calif., on 5 June. While in port, the vessel underwent repairs and alterations before taking on marines and equipment for transportation to the South Pacific.

On 1 July, Alhena got underway for Tongatabu. Upon her arrival there, she was assigned to Amphibious Forces, Pacific Fleet. A few days later, the vessel sailed to the Fiji Islands to participate in amphibious landing exercises in preparation for the American thrust into the Solomon Islands in which United States forces would take the offensive for the first time in World War II. After completing the exercises, she sortied with Task Group (TG) 62.1 for Guadalcanal, arrived off that island on 7 August, and began unloading operations. In spite of heavy enemy air attacks, the ship carried out her task successfully and got underway on the evening of the 9th for Espiritu Santo, New Hebrides, where she arrived the next morning. The ship took on another load of cargo; set out for the Solomons on the 20th; reached Tulagi two days later; and began discharging sorely needed supplies. She meanwhile took on casualties and prisoners of war for evacuation to Espiritu Santo and reached that island on 24 August.

During the next month, Alhena carried out a series of supply runs between Espiritu Santo and Efate, New Hebrides. This pattern of operations was interrupted on 24 September, when she left Espiritu Santo bound for the Solomons. She moored off Guadalcanal on the 26th and began a routine of unloading her cargo ashore during the day and retiring seaward each night. The work proceeded successfully in spite of heavy Japanese air harassment until the task was completed on the 29th and the vessel sailed for Espiritu Santo. At 2354, a torpedo from the Japanese submarine I-16 struck the ship in the area of the number five hold and caused extensive damage in the after part of the ship. The attack killed four crewmen, wounded 20, and left one missing. Fires broke out but were quickly brought under control. She was unable to make any headway and drifted throughout the night and the next day. USS Monssen (DD-436) came alongside on 1 October and took Alhena in tow. USS Navajo (AT-64) relieved the destroyer the next day, and the tug continued on toward the New Hebrides with the cargo ship in tow. They reached Espiritu Santo on the 7th, and work began on temporary repairs to the ship.

On 16 October, Navajo once again took Alhena in tow and headed for New Caledonia. They reached Noumea on the 20th, and the repair work continued until 8 November when she got underway under her own power for Australia. She reached Sydney on 20 November and remained there until the following June undergoing final repairs and conversion to an attack cargo ship. As a result of her new configuration, the vessel was redesignated AKA-9 on 26 November 1942. Finally, over eight months after being torpedoed, Alhena returned to duty in the South Pacific. She left Sydney on 10 June 1943 and shaped a course for Noumea. During the next few months, the ship was engaged in runs between Noumea and Guadalcanal and also made port calls at Auckland, New Zealand, to take on cargo. In late October and November 1943, Alhena took part in operations on Bougainville, the largest of the Solomon Islands. Although taken under enemy attack several times, Alhena discharged her troops and supplies without sustaining any damage.

Following this operation, the ship resumed her runs between Noumea and Guadalcanal and continued that duty until departing Guadalcanal on 24 March 1944, bound for Hawaii. Following a stop at Funafuti, Ellice Islands, en route, she reached Hawaii on 9 April. Throughout April and May, Alhena conducted maneuvers and loading operations in Hawaiian waters in preparation for the impending assault on Saipan. She departed Honolulu on 30 May with troops of the 2d Marine Division embarked, bound via Eniwetok for Saipan. Alhena arrived off Saipan on 15 June and began debarking her troops. Despite undergoing two air attacks while unloading, she completed the process on the 23d, left the area, touched at Pearl Harbor on 4 July, and pushed on the next day toward the California coast. The ship entered San Francisco Bay on the llth and, shortly thereafter, began a three-month period of overhaul. 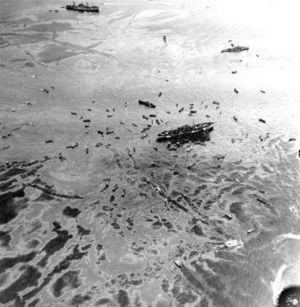 Explosion of the USS Mount Hood (AE-11) in Seeadler Harbor, Manus, Admiralty Islands, 10 November 1944. Small craft gathered around the USS Mindanao (ARG-3) during salvage and rescue efforts shortly after Mount Hood blew up about 350 yards away from Mindanao's port side. Mindanao, and seven motor minesweepers (YMS) moored to her starboard side, were damaged by the blast, as were the Alhena (in the photo's top left center) and USS Oberrender (DE-344), (top right). Note the extensive oil slick, with tracks through it made by small craft.

The work was finished in early October, and Alhena got underway on the 13th bound for the Admiralty Islands. She reached Manus on 29 October. While at anchor in Seeadler Harbor waiting to discharge her cargo, she was damaged by the explosion of ammunition ship USS Mount Hood (AE-11) at 0855 on 10 November. Three of her crew members were killed and 70 were wounded, 25 of them seriously. Alhena herself suffered extensive damage above decks which necessitated some six weeks of repair work. The ship resumed action in mid-December.

She participated in the invasion of Luzon at Lingayen Gulf in January 1945. She then sailed to Ulithi to take on cargo and moved thence to Guam to embark troops of the 3d Marine Division. Alhena departed Guam on 9 March and shaped a course for Iwo Jima where she sent her marines ashore as part of the invasion force.

Having discharged her embarked troops and equipment, the ship left the Volcano Islands and proceeded to Noumea. Alhena remained in port there for nearly two months in reserve for the Okinawa invasion. In late May, she steamed to Leyte to replenish her supplies. From early June through the end of the war in September, Alhena operated between Manila, Philippines, and various ports in New Guinea carrying troops, supplies, and equipment. Among her ports of call were Finschhafen, Hollandia, and Oro Bay, New Guinea. On 13 October, Alhena entered Tokyo Bay. She operated in Japanese waters supporting American occupation forces through 19 November. On that day, the ship departed Yokosuka, Japan, bound for the United States. The cargo vessel paused at Seattle, Wash., before sailing on to San Francisco.

After remaining in port through the Christmas holidays, she got underway on 6 January 1946 for the Far East. The ship made port at Okinawa on 22 January and soon continued on to Tsingtao, China. After discharging her cargo there, she left Chinese waters on 2 March, bound for the United States.

Alhena arrived at San Francisco on 18 March and underwent a period of voyage repairs. She set sail on 12 April and shaped a course for the east coast. After transiting the Panama Canal, the cargo ship arrived at Norfolk on 1 May. One week later, she moved on to New York City. Alhena was decommissioned there on 22 May 1946, and her name was struck from the Navy list on 15 August 1946. She was transferred to the Maritime Administration for disposal on 12 September 1946. The ship was later sold and refitted for service as a merchant vessel.