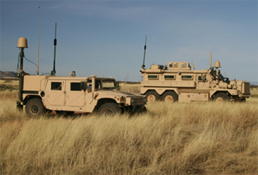 The AN/ULQ-30 CESAS, Communication Emitter Sensing and Attacking System (CESAS), is a United States Marine Corps capability for electronic warfare, which can operate in a fully mobile, on-the-move from platforms including the HMMWV. While it covers a very wide frequency range, between 20 to 2500 MHz[1] frequency range, it has an approximately 20 mile range and its first target is cellular telephony. It replaces the existing ULQ-19. AN/ULQ-30 systems are meant to meet an urgent and current requirement, is in operational testing, and should be ready for a production decision in the third quarter of 2009.[2] In operation, the unit would travel with the Ground Combat Element of a Marine Air-Ground Task Force to detect and neutralize enemy communications threats.

Beginning in November 2008 and with updates through January 2009, the Marine Corps issued a call for commercial-off-the-shelf equipment (COTS), which, in combination with government-off-the shelf equipment, might meet all or most of this requirement. [3] It would be able to mount into a variety of vehicles, switch between mobile operations and stationary operations in less than 10 minutes and capable of emergency displacement within 30 seconds, and use both directional and omnidirectional antennas under computer control. Ideally, it would be effective against signals, which might use frequency agility, in the 2 MHz to 6 GHz range up to 30 miles away.

As well as detection and engagement of threats, it must be able to record the information in a form compatible with existing signals intelligence systems.

The need to have tactical electronic warfare effective against commercial cellular telephony is an interesting reality of today's asymmetrical warfare. Especially in urban peace operations, the cellular system is a basic part of civilian infrastructure that cannot be confiscated or destroyed without massive disruption. Nevertheless, the requirements of security for specific military operations may require that it can be disabled while the operation is in progress.