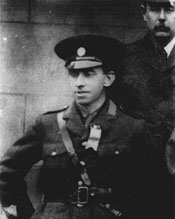 Thomas Mc Donagh (1 February 1878 – 3 May 1916) was an Irish revolutionary executed by the British after the Easter Rising of 1916. He was a Tipperary man who helped Padraig Pearse in the foundation of St. Enda's school in Rathfarnham. He was also a lecturer in University College Dublin as well as being a founder member of the Irish Volunteers and its director of training. He was a playwright with two major plays; When the Dawn is Come, produced at the Abbey, 1908 and Metempsychosis, by the Theatre of Ireland, 1912. Mc Donagh met Padraig Pearse in the Aran Islands as both men were involved in the Gaelic League. Thomas MacDonagh commanded the garrison at Jacob's Biscuit Factory and all the forces in Stephens Green, the College of Surgeon's and Harcourt Street Station during the 1916 Easter Rising. His second in command was Michael Mallin, and one of his chief operation officers was the Countess Markievicz, who operated from the College of Surgeons with Mallin.