There is a deleted portion about comparison of alcohol prohibition and drug prohibition. The source I used is some article from CATO Institute, probably a biased source I admit. Anyone knows how to handle it properly? I know that myself has a strong opinion on it, so maybe I need to stay out. Yi Zhe Wu 21:13, 8 July 2007 (CDT) 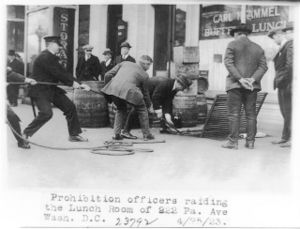 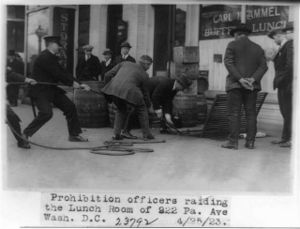 Thanks for the modification, but sorry, this time I would not say I like the new image, because it is too light and unclear. But I will think about what to do with it. Regards. Yi Zhe Wu 21:32, 22 August 2007 (CDT)

Another comma-infected article name! There really is no good reason for this. "Prohibition of alcohol in the United States" would be a better title in my view. So, let's change it! I'll change the article name in two weeks time unless anyone objects. –Tom Morris 22:04, 27 July 2010 (UTC)

I agree with you Tom, but check the history -- this was started, then abandoned a long time ago, when Prof. Jensen and his commas ruled the History Roost. Hayford Peirce 22:54, 27 July 2010 (UTC)

I think that Prohibition (American) would be fully suitable. With lots of redirects, of course. Hayford Peirce 23:19, 27 July 2010 (UTC)

I certainly won't argue, Peter, I'm not much of a chauvin. But note that no other countries in North or South America try to call themselves that -- and since it's hard to say "United Statesan" in any language, they frequently call us 'Merkins Norde Americanos.... Hayford Peirce 00:06, 28 July 2010 (UTC)

Hayford, I've spent a good part of my career working for Canadian companies, and I find quite a few Canadians do appreciate us not using the "American". It is funny sometimes, however, to find them shocked to find someone from "down here" knowing anything about Canadian history or culture.

Ever read the story "Digging the Weans"? It's in my collection of A Stress Analysis of a Strapless Evening Gown'.

More to the point on this article, I'd like to see more from a social historical and cultural standpoint. What are the factors that led to this Great Experiment, and the continuing desire of a significant portion of U.S. society to have government police morality? This isn't meant in a condemnatory way, but to differentiate from other democratic societies. This isn't to say that other democracies haven't played morality police at times, but I generally see a trend away from that. Is there a societal inverse correlation between economic and social freedom? I hope people more expert than I chip in, using this as a case study. Pure intuition -- there is a relationship between the drive for Prohibition and the financial swings that led to the crash of 1929. That doesn't mean causality; perhaps the Drys were seeking ways to control what they saw as moral speculation.

Some random literature on the subject: [1]; [2] -- one thread is that the crash drove feelings against Prohibition, another is that in the Depression, the government needed liquor revenues. Howard C. Berkowitz 01:12, 28 July 2010 (UTC)