The name "spherical harmonics" was first used by William Thomson (Lord Kelvin) and Peter Guthrie Tait in their 1867 Treatise on Natural Philosophy.[1] The term harmonic function was coined earlier by William Thomson for solutions of the Laplace equation, ∇²V = 0, and as the spherical harmonic functions appear as the solution of the Laplace equation in spherical polar coordinates, their name followed immediately. In German the functions are called "Kugelfunktionen" (literally sphere functions), and in French they are known as "fonctions harmoniques sphériques", which is equivalent to their English name.

In quantum mechanics spherical harmonics appear as eigenfunctions of (squared) orbital angular momentum. Spherical harmonics are ubiquitous in atomic and molecular physics. Further, they are important in the representation of the gravitational and magnetic fields of planetary bodies, the characterization of the cosmic microwave background radiation, the rotation-invariant description of 3D shapes in computer graphics, the description of electrical potentials due to charge distributions, and in certain types of fluid motion.

It can be shown that the spherical harmonics, almost always written as

, form an orthogonal and complete set (a basis of a Hilbert space) of functions of the spherical polar angles, θ and φ, with ℓ and m indicating degree and order of the function. This implies that the harmonics can be used to describe a function of θ and φ in the form of a linear expansion; the expansion coefficients may be used as linear regression parameters, which means that they may be chosen such that the original and expanded function "resemble" each other as closely as possible. The more spherical symmetry the original function possesses, the shorter the expansion and the fewer fit (regression) parameters have to be determined.

Polar plots are shown of a few low-order real spherical harmonics (functions of θ and φ) to be defined in this article. The plots show clearly the nodal planes of the functions. The absolute values are meaningless because the functions are not normalized and accordingly the normalization factors are omitted from their definitions. 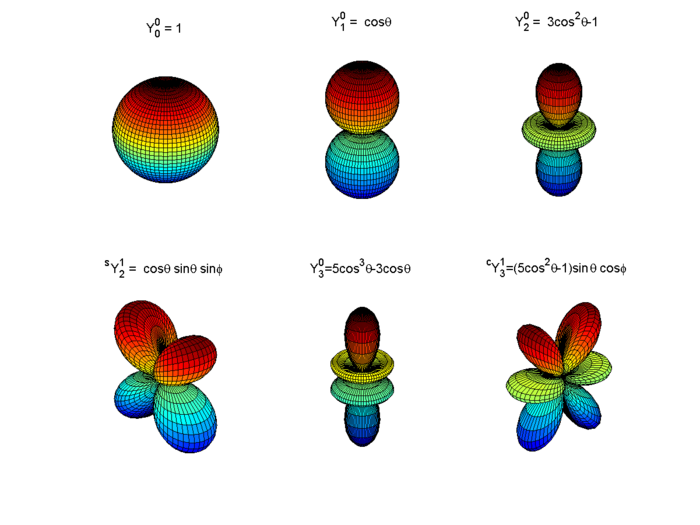 will be reserved for the complex-valued functions normalized to unity. It is convenient to introduce first non-normalized functions that are proportional to the

. Several definitions are possible, we start with one that is common in quantum mechanically oriented texts. The spherical polar angles are the colatitude angle θ and the longitudinal (azimuthal) angle φ. The numbers ℓ and m are integral numbers and ℓ is positive or zero.

is a (phaseless) associated Legendre function. The m dependent phase is known as the Condon & Shortley phase:

An alternative definition uses the fact that the associated Legendre functions can be defined (via the Rodrigues formula) for negative m,

Noting that the associated Legendre function is real and that

Use of the following non-trivial relation (that does not depend on any choice of phase):

If the m-dependent phase would be dropped in both definitions, the functions would still agree for non-negative m. However, the first definition would satisfy

whereas the second would still satisfy

from which follows that the functions would differ in phase for negative m.

It can be shown that

The integral over φ gives 2π and a Kronecker delta on m and m′. Thus, for the integral over θ it suffices to consider the case m = m'. The necessary integral is given here. The (non-unit) normalization of

where the cross stands for the cross product of the position vector r and the gradient ∇; ℏ is Planck's constant divided by 2π. The components of L satisfy the angular momentum commutation relations:

where εijk is the Levi-Civita symbol. These relations define a Lie algebra, as discussed later in this article. In angular momentum theory it is shown that these commutation relations are sufficient to prove that L² has eigenvalues ℓ(ℓ+1),

where ℓ is a natural number. From here on we take ℏ equal to unity (this is part of the system of atomic units). The operator L² expressed in spherical polar coordinates is,

The eigenvalue equation can be simplified by separation of variables. We substitute

into the eigenvalue equation. After dividing out Ψ and multiplying with sin²θ we get

In the spirit of the method of separation of variables, we put the terms in square brackets equal to plus and minus the same constant, respectively. Without loss of generality we take m² as this constant (m can be complex) and consider

This has the solutions

The requirement that exp[i m (φ + 2π)] = exp[i m φ] gives that m is integral. Substitution of this result into the eigenvalue equation gives

The eigenvalue equation does not establish phase and normalization, so that these must be imposed separately. This was done earlier in this article.

we summarize the action of the components of orbital angular momentum on spherical harmonics:

Clearly, this can be rewritten as

where we divided out

Finally, it is evident that

Consider the infinitesimal rotation from which finite rotations can be generated.[3] For example, a rotation by angle α about the z-axis is described by the matrix:

where the form following the arrow applies for very small angles α. The matrix Rz is called the generator of the z-rotation. The factor i is introduced so the finite rotation can be expressed in terms of this generator as a simple exponential:

as can be verified using the Taylor series:

for any choices of subscripts. Here εijk is the Levi-Civita symbol mentioned above. The commutation relations express the fact that the order (sequence) of rotations matters.

Suppose these commutation relations now are viewed as applying in general, and while still considered as connected to rotations in three dimensional space, the question is opened as to what general mathematical objects might satisfy these rules. A set of symbols with a defined sum and a product taken as a commutator of the symbols is called a Lie algebra. [5] In particular, one can construct sets of square matrices of various dimensions that satisfy these commutation rules; each set is a so-called representation of the rules. One finds that there are many such sets, but they can be sorted into two kinds: irreducible and reducible. The reducible sets of matrices can be shown to be equivalent to matrices with smaller irreducible matrices down the diagonal, so that the rules are satisfied within these smaller constituent matrices, and the entire matrix is not essential. The irreducible sets cannot be arranged this way.[6]

The matrices can be viewed as acting upon vectors in an abstract space. For example, a space with an odd number of dimensions (2ℓ+1) can be constructed from the spherical harmonics Yℓm, and their transformations under infinitesimal rotations. The Yℓm depend upon the angles θ,φ describing orientation in ordinary three-dimensional space, but infinitesimal rotations of these arguments mix up the Yℓm in a fashion described by irreducible matrices of dimension (2ℓ+1) that satisfy the commutation relations.[7]

The construction of irreducible matrices of any dimension at all is done as follows. If the generator of an infinitesimal rotation is labeled J, then the basis vectors in this space can be labeled by the integers j and m where m is restricted to the values { −j, −j+1, ... , j−1, j }. Denoting a basis vector by |j, m⟩, one finds:

Here Jz generates an infinitesimal rotation about a direction chosen as the z-axis, and J2 = Jx2 + Jy2 + Jz2 is the so-called Casimir operator[8]. In particular, these equations recover the Pauli spin matrices in two dimensions and the infinitesimal transformations of the Yℓm in (2ℓ+1) dimensions.[9] See the development in Eigenfunctions of orbital angular momentum earlier in this article.

The group of proper (no reflections) rotations in three dimensions is SO(3). It consists of all 3 x 3 orthogonal matrices with unit determinant. A unit vector is uniquely determined by two spherical polar angles and conversely. Hence we write

Let R be a unimodular (unit determinant) orthogonal matrix, then we define a rotation operator by

The inverse matrix appears here (acting on a column vector) in order to assure that this map of rotation matrices to rotation operators is a group homomorphism. Since this point was discussed at some length in Wigner's famous book on group theory,[10] it is known as Wigner's convention. Some authors omit the inverse on the rotation and find accordingly that the map from matrices to operators is antihomomorphic (i.e., multiplication of operators and matrices is in mutually reversed order).

The square 2ℓ+1 dimensional matrix that appears here is known as Wigner's D-matrix. Obviously, the set of matrices of fixed ℓ form a representation of the group SO(3). It can be shown that they form an irreducible representation of this group. The rotation operator is unitary and the spherical harmonics are orthonormal, hence the Wigner rotation matrix is a unitary matrix:

where Eℓ is the 2ℓ+1 dimensional identity matrix. From this unitarity follows the following useful invariance

The rotation of spherical harmonics may be rewritten as follows (where we introduce the Racah normalized functions):

Let θ and φ be the spherical polar angles of r, then as is shown here,

Substitution of this rotation, use of group homomorphism and unitarity of D-matrices,

The spherical harmonics are orthogonal and it can be shown that they are complete in the least squares sense for functions f of θ and φ. That is, the square of the "distance" between f and the expansion

can be made arbitrarily small for sufficiently large N. It is common to write somewhat loosely

Alternatively one can invoke the Peter-Weyl theorem, from which follows that the Wigner D-matrices are complete, as the rotation group SO(3) is compact. In general Wigner D-matrices depend on three rotation angles (for instance Euler angles). Application of the completeness of the D-matrices to functions that do not depend on one of the three angles proves the completeness of spherical harmonics, while noting the relation between the spherical harmonics and the D-matrices pointed out earlier in this article.

We skip the analytic proof and outline the physical proof. Under a simultaneous rotation R of two vectors the angle between them is not changed,

because RTR is equal to the 3 × 3 identity matrix. Choose the rotation R such that the rotated unit vector

coincides with the z-axis, and use that the sum over m in the following is a rotation invariant (see earlier in this article)

As a corollary we find Unsöld's theorem[13]

This double integral is called a Gaunt[14] coefficient. By the Wigner-Eckart theorem it is proportional to the 3j-symbol

The 3j-symbol is zero unless

where the quantity with three zeros in the bottom row is also a 3j-symbol.

Since the transformation is by a unitary matrix the normalization of the real and the complex spherical harmonics is the same. By definition, for m > 0 we have the phaseless expressions

The real functions are sometimes referred to as tesseral harmonics, see Whittaker and Watson[11] p. 392 for an explanation of this name.