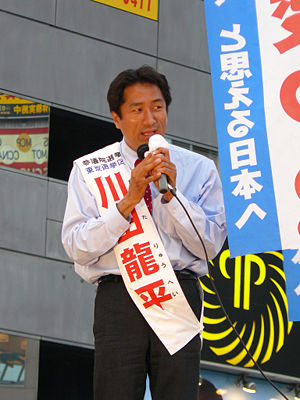 (CC) Photo: Sho Kasuga
Ryuhei Kawada campaigning in elections to the upper house of the Japanese parliament in 2007.

Ryuhei Kawada (川田龍平 Kawada Ryuhei, born 12th January 1976) is a Japanese politician who was elected to the House of Councillors, the upper chamber of the Japanese parliament, in 2007 as an independent.

Kawada has haemophilia and became HIV positive as a child through infected blood products used in medicine. Kawada was just one victim of thousands in what became known as the '[HIV] tainted blood scandal'. He took legal action alongside others against the government and the pharmaceutical company involved, leading to a successful prosecution in 1996. In 2007, Kawada campaigned for a seat in parliament, promising to scrutinise the Health, Labor and Welfare Ministry and successfully seeking elected office for the Tokyo constituency.[1] The same year, he joined a House committee on environmental affairs. Kawada continues to campaign on health issues, global poverty, and discrimination.[2]