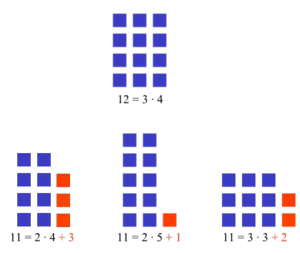 The prime number 11 illustrated with square tiles. 12 squares can be arranged into a rectangle with sides of length 3 and 4, so 12 is not a prime number. There is no way to form a full rectangle more than one square wide with 11 squares, so 11 is a prime number.

A prime number is a whole number greater than 1 that can be evenly divided by only two different positive whole numbers, namely 1 and itself. The first few prime numbers are 2, 3, 5, 7, 11, 13, and 17.

cannot be expressed as the product [1] of two numbers

, except for the trivial factorizations

that all numbers possess.

With the exception of 2, all prime numbers are odd numbers, but not every odd number is prime. For example,

The importance of prime numbers in arithmetic comes in large part from the unique factorization of numbers. Every natural number

can be written as a product of prime factors, and all such expressions for any particular

will contain the same factors, differing only in the sequence in which they are listed.

For example, we can write

, where all of the factors in the product are prime numbers; there is no other way of writing 5040 as a product of prime numbers except by rearranging the prime factors we already have, such as

The existence of a single unique factorization into prime numbers is formalized as the Fundamental Theorem of Arithmetic. The fundamental property of the integers which it expresses is a critical building block in many of the important results in the area of elementary number theory. An analogy can be made between the role prime numbers play in arithmetic and the role atoms play in chemistry. [2]

It is this aspect of prime numbers that is of such interest to modern cryptography, in particular in the area of public key ciphers, as mentioned above. The most popular of these ciphers depends for its security on the difficulty of factoring extremely large numbers (many hundreds of digits in length) into their prime factors; were a fast algorithm for doing so to be discovered, some of today's most sophisticated ciphers would be instantly broken.

Why 1 is not considered a prime

It might be intuitive to consider 1 a prime number, and in the past, mathematicians often did consider it to be a prime. The Fundamental Theorem of Arithmetic is a good example of why mathematicians have changed their minds on this point over the last century, and have definitively revised the formal definition of 'prime number' so that 1 is no longer included.

The Fundamental Theorem of Arithmetic is no longer strictly true if 1 is considered prime. Consider, for example

This is an example of a more general trend in mathematics over the past century, which is to be much more careful in the treatment of 0 and 1 (which are very special numbers, with unusual properties that no other numbers have). Mathematicians need to be especially precise in statements that include them.[3]

There are infinitely many primes

presents a problem. On the one hand, the number

is a multiple of

, and multiples of the same prime number are never next to each other, so N itself can't be a multiple of

. The same argument actually shows that

itself cannot be a multiple of any of the prime numbers

. On the other hand, every number

is divisible by some prime. (For example, its smallest divisor greater than 1 must be a prime.[4])

Although most other proofs of the infinitude of prime numbers are more complicated, they can also provide more information. One mathematical milestone known as the Prime Number Theorem estimates how many of the numbers between 1 and x are prime numbers (see below). Another such proof is Euler's demonstration that the sum of the reciprocals of the primes diverges to ∞.

How can we tell which numbers are prime and which are not? It is sometimes possible to tell that a number is not prime by looking at its digits: for example, any number whose last digit is even is divisble by 2, and any number ending with 5 or 0 is divisible by 5. Therefore, except for the prime numbers 2 and 5, any prime number must end with the digit 1, 3, 7, or 9. This check can be used to rule out the possibility of a randomly chosen number being prime more than half of the time, but numbers that end with 1, 3, 7, or 9 often have divisors that are harder to spot.

To find large prime numbers, we must use a systematic procedure — an algorithm. Nowadays, prime-finding calculations are performed by computers, often using very complicated algorithms, but there are simple algorithms that can be carried out by hand if the numbers are small. In fact, the simplest methods for locating prime numbers are some of the oldest algorithms, known since antiquity. Two classical algorithms are called trial division and the sieve of Eratosthenes.

Trial division consists of systematically searching the list of numbers

for a divisor; if none is found, the number is prime. If n has a small divisor, we can quit as soon as we've found it, but in the worst case — if n is prime — we have to test all

numbers to be sure. This algorithm can be improved by realizing the following: if n has a divisor a that is larger than

, there must be another divisor b that is smaller than

. Thus, it is sufficient to look for a divisor up to

Continue with the next

The Sieve of Eratosthenes not only provides a method for testing a number to see if it is prime, but also for enumerating the (infinite) set of prime numbers. The idea of the method to write down a list of numbers starting from 2 ranging up to some limit, say:

The first number (2) is prime, so we mark it, and cross out all of its multiples:

The smallest unmarked number is 3, so we mark it and cross out all its multiples (some of which may already have been crossed out):

The smallest unmarked number (5) is the next prime, so we mark it and cross out all of its multiples:

Notice that there are no multiples of 5

We have now found all prime numbers up to 20.

It is evident that the prime numbers are randomly distributed but, unfortunately, we don't know what 'random' means. — R. C. Vaughan

The list of prime numbers suggests that they thin out the further you go: 44% of the one-digit numbers are prime, but only 23% of the two-digit numbers and 16% of the three-digit numbers. The trial division method explained above provides an intuitive explanation. To test whether a number

is prime, you have to try whether it can be divided by all numbers between 2 and

. Large numbers have to undergo more tests, so fewer of them will be prime.

The Prime Number Theorem explains how fast the prime numbers thin out. It says that if you are looking around the number

, about one in every

denotes the natural logarithm of

). The formal statement of the prime number theorem is

is the number of primes

There are many unsolved problems concerning prime numbers. A few such problems (posed as conjectures) are:

Twin primes are pairs of prime numbers differing by 2. Examples of twin primes include 5 and 7, 11 and 13, and 41 and 43. The Twin Prime Conjecture states that there are an infinite number of these pairs.

The Goldbach conjecture states that every even number greater than 2 can be expressed as the sum of two primes. For example, if you choose the even number 48, you can find

Prime numbers having special forms are important in various applications. For instance, Fermat primes are prime numbers that can be written as

for some positive integer n. Such prime numbers make a surprising appearance in the solution to the problem of which regular polygons can be constructed with a straight-edge and compass. Many unsolved problems ask whether there are infinitely many primes of a certain form. For instance, it is unknown if there are infinitely many Fermat primes, Mersenne primes, or Sophie-Germain primes. See the Related articles subpage for a list of special types of primes.

A prime number is usually defined as a positive integer other than 1 that is (evenly) divisible only by 1 and itself. However, there is another way of defining prime numbers, and that is the observation that a number

is prime if in all cases where it can evenly divide the product of two numbers,

, it must also evenly divide one of those two numbers.

This example illustrates the principle at work in this definition; when the number

cannot evenly divide one of the two numbers, either

, it must be made up of two factors, one of which divides one of the numbers (

), and the other the second number (

If the first characterization of prime numbers is taken as the definition, the second is derived from it as a theorem (known as Euclid's lemma), and vice versa.

We may express this second possible definition in mathematical notation as follows: A number

(natural number) is prime if for any

It may feel natural to take the first of the two characterizations we gave as the definition. However, when one generalizes the concept of "integer", and starts considering algebraic integers, it becomes clear that, while one can study elements that are divisible only by units and (unit multiples of) themselves, these elements need not have all of the habitual properties of prime numbers. Thus, it has become customary to call such elements irreducible, and to reserve the adjective prime for prime ideals, which are objects whose definition mimics the second characterization of prime numbers given above. (Algebraic integers factorize uniquely into prime ideals, but not, in general, into irreducibles; this is the main reason why prime ideals deserve the label prime in their name, whereas irreducibles are deprived of it.)

There are rings -- including the "usual" integers

and a few other rings, the proof of this statement is based on the fact that the remainder of a division is smaller than the divisor. Rings for which this is true are called Euclidean domains.) In many rings, however, irreducible elements may generate non-prime ideals, and a prime ideal may fail to be generated by any irreducible element (or by any one element of the ring).