New Zealand is an island nation in Oceania, in the South Pacific.

New Zealand is situated between the Tasman Sea and the Pacific Ocean and comprises two large islands, the North Island and the South Island, some smaller islands that are inhabited, such as Stewart and Chatham Islands, and a large number of uninhabited islets.

New Zealand is located on the western edge of the Pacific Ocean, separated from the south-eastern coast of the island-continent of Australia by nearly three thousand kilometres of the Tasman Sea. It lies at a latitude of around 40 degrees south of the equator, and a longitude of around 179 degrees east of Greenwich. Consequently, its time zone is twelve hours ahead of UTC from April to October, and thirteen hours ahead from October to April, when daylight saving is in effect. 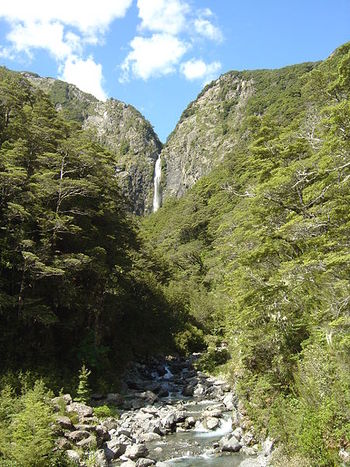 New Zealand has no native land mammals, though there are three species of native bat, Chalinolobus tuberculata, the long-tailed bat, and Mystacina robusta and M. tuberculata, two closely related species collectively known as the short-tailed bat.[1]

New Zealand's isolated location means that its native wildlife is largely endemic to the country. New Zealand has a great many native bird species, including the kiwi, the flightless bird whose name became a nickname first for New Zealand military personnel in the World Wars and then for New Zealanders in general. Other native New Zealand birds include the tui and the kaka. Extinct birds include several species of moa and Haast's eagle that preyed upon them.[2] New Zealand also possesses a plethora of native reptiles, such as the tuatara, and insects, including the weta, a large beetle.

Native trees include the pohutukawa and kowhai.

New Zealand was historically one of the last parts of the world to become inhabited, by the Maori, the first of whom arrived by ocean-going canoe in around the year 1300. In the early twentieth century it was widely believed that the Moriori of the Chatham Islands represented a previous population that was driven out of New Zealand by the Maori, but this is now regarded as an attempt by European settlers to justify their own mistreatment of the Maori.[3]

New Zealand first came to the attention of the West in 1642 when the Dutch explorer Abel Janszoon Tasman first arrived at the South Island. Tasman named the new land, which he believed to be part of a large southern continent, 'Staten Landt' after the Dutch States-General. However, it was the later expedition of the English explorer James Cook, in 1769, which sparked the European settlement of New Zealand (the name being a corruption of the Dutch 'Nieuw-Zeeland'). By the beginning of the nineteenth century, there were British settlements on both of the main islands, though New Zealand was not yet formally a British colony.

It wasn't until 1840 that New Zealand was formally brought under the sovereignty of the British Crown, with the Treaty of Waitangi, which forms an important part of New Zealand's constitutional law to this day. The Treaty provided that the Maori would retain control of their lands and fishing rights, although it afforded the Crown the pre-emptive right to buy land. In spite of the treaty, and to a large extent because of unclear wording in the Maori translation, the second half of the nineteenth century saw great strife between Maori and Pakeha (a Maori word originally meaning 'foreigner' which has come to refer to New Zealanders of largely European ancestry) over land; these disputes have only begun to be resolved in the last few decades. One of the more controversial aspects of the Treaty is the Maori phrase 'tino rangatiratanga', which translates as 'absolute chieftainship', and is interpreted by some as affording absolute sovereignty to Maori. The relationship between Pakeha and Maori is still an important issue in New Zealand politics.

The independence of New Zealand was not granted all at once. It is most often reckoned as occurring in 1907, when New Zealand was granted Dominion status, or in 1947, with the adoption of the Statute of Westminster, which removed the reserve power of the British Parliament to legislate for New Zealand.

New Zealand is a constitutional monarchy with King Charles III as its Head of State. The Queen's personal representative is the Governor-General who is appointed on the recommendation of the incumbent Prime Minister. The office is currently held by Cindy Kiro. New Zealand's current prime minister is Chris Hipkins. Under Prime Minister David Lange, a strict anti-nuclear policy, covering both nuclear power generation and nuclear weapons, was implemented, and still enjoys widespread popular support.[4]

New Zealand is a member of the Commonwealth of Nations, and enjoys particularly close relations, including reciprocal working rights for citizens and permanent residents, with its neighbour, Australia.

The majority of New Zealanders are Pakeha (white New Zealanders), with a sizable Maori minority. Other significant ethnic minorities include Pacific islanders and people of Japanese, Chinese and South East Asian descent.