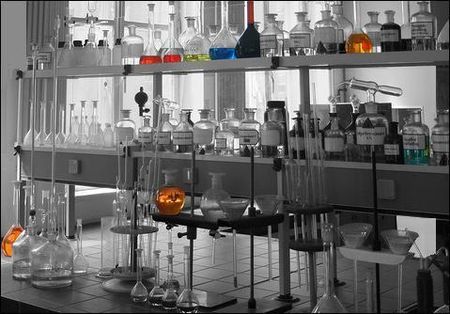 Inorganic chemistry is a subdiscipline of chemistry involving the scientific study of the properties and reactions of all chemical elements and chemical compounds other than the vast number of organic compounds (compounds containing at least one carbon-hydrogen covalent bond).[1][2]

Inorganic chemistry is closely related to other disciplines such as materials science, earth science, mineralogy, geology and crystallography.

Distinctions between inorganic and organic chemistry

As another example of the ill-defined distinction between inorganic and organic chemistry, oxalic acid (H2C204) is commonly considered to be an organic compound even though it does not contain a carbon-hydrogen bond.

The chemical elements: These have a variety of structure and properties and include:

Ionic compounds: These are always solids at reference conditions of 0 °C temperature and 101.325 kPa absolute pressure and include:

Molecular compounds: These may be solids, liquids or gases and include:

Synthesis reaction: (also referred to as combination or composition reaction)

This is a reaction in which two or more reactants combine to form a single product, where each reactant is a chemical element or compound and the reaction product consist of the two reactants. Examples include:

This is a reaction in which a chemical compound is separated into elements or simpler compounds. It is often defined as being the opposite of a synthesis reaction. Examples include:

This is a reaction characterized by one element being displaced from a compound by another element. Examples include:

This is a reaction in which two compounds exchange bonds or ions to form new, different compounds. Examples include:

Precipitation reaction: (a specific type of metathesis referred to as aqueous metathesis)

This is a reaction that occurs when two inorganic salt solutions, as in the example below, react to form a solution containing a soluble product and another product that is insoluble and precipitates out of the solution:

Neutralization reaction: (another specific type of metathesis that is sometimes referred to as an acid-base reaction)

This is a reaction in which an acid and a base react to form a salt. Water is also produced in neutralizations with Arrhenius acids, which dissociate in aqueous solution to form hydrogen ions (H +), and Arrhenius bases, which form hydroxide ions (OH−). However, water is not produced in all neutralizations as is the case with ammonia. Examples include:

This is a reaction in which the oxidation numbers of atoms are changed. Examples include:

Analysis and characterization of inorganic compounds

The number of known chemical elements that occur naturally on Earth is 94 and the number of diverse inorganic chemical compounds derived by combinations of those elements is virtually innumerable. The characterization of those compounds includes the measurement of chemical and physical properties such as boiling points, melting points, density, solubility, refractive index and the pH and electrical conductivity of solutions.

The techniques of qualitative and quantitative analytical chemistry can provide the composition of a chemical compound in terms of its constituent chemical elements and can thus determine the chemical formula of a compound.

Modern laboratory equipment and techniques can provide many more details for characterizing chemical compounds. Some of the more commonly used modern techniques are: