The geologic history of the earth is preserved and documented in its rocks. The oldest fragment of earth's crust known so far, a detrital zircon crystal, is 4.4 billion years old.[1][2] Since then, rocks have registered the events on our planet, an archive that becomes increasingly complete over time.

Geologists use the term age to refer to specific nomenclature that is much more exact than common use (see "nomenclature" below). Geological ages, in common use, refer to periods of marked change in the processes and events in the entire history of the earth. These changes have been delineated by physical evidence found in the earth’s lithosphere. Ages are also noted in reference to the types of organisms found in the fossil record down to the present day. Changes are marked by (but not exclusive of) such processes as volcanic activity, flooding, and seismic activity.

Geologists describe and study the geologic time in two distinct ways. On the one hand, they try to measure the geologic time as a physical quantity: this is the aim of a field of Earth sciences called geochronometry. The geologic time is most commonly measured with methods based on the radioactive decay of long-lived unstable isotopes present in the earth's crust, and is expressed in Ma (i.e., millions of years ago).

On other hand, geologic time can be described by establishing a hierarchical scheme of relative time subdivisions. This was the only representation of geologic time before radioactive decay was discovered, but it is still widely used in the current geologic practice and research. The boundaries of major relative time subdivisions, and especially those of the erathems, are marked by mass extinctions, in turn associated with physical events such as extreme volcanic activity and bolide impacts (bolides are extraterrestrial bodies, asteroids or a meteors for example, that strike or impact the earth.)[3] [4]

However, the definition of time-rock units must follow a formal procedure, implying that some boundaries are placed at completely arbitrary positions. Indeed, this is the case for most of the minor divisions (ages) of the geologic time.

When relative time subdivisions are coupled with absolute (measured) ages, they constitute a Geologic time scale, which is the main topic of this article.

Different geological time scales exist and the issues involved in arriving at a meaningful date can be very complex.[6] Many regionalised time scales carry variations and omissions, but a reasonable consensus was reached on the 2004 geologic time scale by the International Commission on Stratigraphy (ICS).[7] Subdivisions and absolute ages of this article are based mostly on this publication.

The underlying premises or basic ideas about geological ages and time scales in modern earth science are from people who worked during the period spanning the late 17th to the19th centuries. In 1669, Nicolaus Steno [8] described the principle of original horizontality composed of four basic geologic principles that today are the fundamental concepts of stratigraphy[9]:

So, like layers of paint, the different layers are laid down with the oldest on the very bottom and the youngest on top, then the next and so on. The key to this is understanding that at the time, the processes forming the earth were a complete mystery and explanations could be very convoluted and completely wrong. Steno’s work was a major breakthrough and he has been called the father of modern geology.

In 1795, James Hutton proposed the principle of uniformitarianism, later developed by Charles Lyell (Principles of Geology, published 1830). This principle defines natural geologic processes as uniform in frequency and magnitude throughout time. This is a critical concept in other fields as well, the principle that natural phenomena in process in the far distant past are proceeding in the present time. The magnitude of the processes were considered to be unchanged and all change was the result of the ‘sum of small effects’. Conceptually this came to mean that the earth is very old. How old was originally posited to be in the tens of millions of years but later work by Ernest Rutherford changed this dramatically.

The next phase of development in this field was from a canal builder in 19th century England, William Smith, In 1815 Smith produced a geologic map of England demonstrating the principle of biotic succession: The different types of animals that had lived and died in that region over immense periods of time had changed and left their fossils attesting to their existence. Simply put the principle of biotic succession says that fossils are found in rocks in a very definite order. Smith’s work has been incorporated to use fossils to define increments or stages within a relative time scale. Many of the ages are in fact named for the presence of life at those times. [10][11][12][5]

Determining geological ages and configuring current schema today is a direct outgrowth of research into natural radioactive decay that began with French physicist Henry Becquerel's discovery of the radioactive decay of uranium in 1896. Employing radioactivity to determine geologic time was first suggested in 1905 by New Zealand physicist Ernest Rutherford. Rutherford had determined that radioactive decay in any given material proceeds at a constant rate. Those elements are present in geologic samples and their radioactivity can be measured in extreme lengths of time.[13] In 1907, radiochemist Bertram Borden Boltwood (Massachusetts) published his schema for geologic ages that incorporated radioactive decay measures.[14] Boltwood’s premise for his dating method was that the decay of uranium suggested that geologic age could be determined by ratios of uranium, thorium and lead contained in the rocks. (Lead is the product of the radioactive decay of uranium and thorium.) This produced values of extreme lengths of time, some exceeding two billion years. Boltwood’s ages have since been revised but his calculations indicating from hundreds to thousands of millions of years are still considered correct.[15][16][17]

Determining the age of the earth from physical evidence involves a number of fields that are strongly interrelated. Often the terms are intermingled while the goals and methods may be similar or different.

For largely pragmatic reasons, earth history needs to be subdivided into smaller portions. However, any period has different aspects:

These subdivisions are done locally as well as globally. All hierarchically ordered units better serve research if they are fixed by sound boundaries that can be easily correlated worldwide. [23]

The ICS nomenclature for stratigraphic units is both Chronostratigraphic and Geochronological. They are positioned here in descending order (largest span of time to narrowest):

There are two meanings for "age": one is the fundamental chronostratigraphic unit Age (geology), the other is the result an absolute datation, e.g., a radiometric datation, and is a number (e.g., the Induan age begun ca. 252 Ma, where "252 Ma" is a radiometric age). So "Induan" is an age, but to construe the "Triassic" as an age is an error: "Triassic" is a period.

These demarcations are delineated below in length of time in millions of years.

Global definitions of chronostratigraphic boundaries are the purview of the International Union of Geological Sciences (IUGS). While there are regional stratigraphic schemata that will vary considerably, there are international standards with which these various schema do agree and are referred to. The recommendations for Global Standard Stratotype-section and Points (GSSP) which demarcate the boundaries of the strata and ultimately define the age of the earth are processed through a sequence of stages. Stratigraphic boundaries are proposed to the sub-commission on a particular geologic stage who then submit their recommendations to the International Commission on Stratigraphy (ICS) for official acceptance. The ICS then refer their recommendations to the Executive Committee of IUGS for ratification. In this way, geologists the world over refer to a standard reference for the worldwide correlation of the boundary.

From the Greek word kainos (καινος), meaning fresh or new and zoikos (ζωικός), of or pertaining to animals, combined here to denote new life. This marked the end of a major extinction of dinosaurs, foraminifers, calcareous nannofossils etc. and the emergence of an abundance of mammalian life.[27][26][25]

The name is derived from Cambria, the Roman word for Wales, the area where the rocks of the Cambrian Period was first studied. Pre- indicates the ages before the rocks dated in Wales.[30]Not actually termed an ‘Eon' by the ICS. Beginning approximately 4,500 mya and ending approximately 543 mya, the Precambrian encompasses about 88% of the earth's entire existence. The Precambrian encompasses three eons (in descending order to oldest), subdivided into eras:

The Hadean Eon is divided into varying era schemes but none are recognised by the ISC. The Hadean is the period of time the earth was forming literally from a gaseous cloud as the solar system and the sun were forming. The only rocks on earth that date from that period are meteorites which are about 4.5 billion years old (the oldest lunar rocks are also about 4.5 billion years old). Technically, the Hadean is not a geologic eon since there are no rocks on the planet from the time of formation. The oldest known earth rocks are about 3.8 billion years old and would have formed after the earth turned from a molten to a solid state. The Hadean is not recognised by the International Commission on Stratigraphy.[31][32]

The geological ages were originally demarcated into Primary, Secondary, Tertiary and Quaternary Eras. Giovanni Arduino (circa 1759) proposed that all of geologic time should be broken up into three great orders: the Primary, Secondary, and Tertiary. In 1829, Jules Desnoyers proposed the term "Quaternary" to describe of rocks younger than the youngest Tertiary deposits. The eras have since been renamed and Tertiary and Quaternary were merged into the Cenozoic as “periods” not eras. However, the boundary between the Tertiary (65 to 1.8 mya) and Quaternary (1.8 mya to today) were ambiguously defined and these terms have in turn been replaced. The International Commission on Stratigraphy now endorses the terms Paleogene and Neogene to subdivide the Cenozoic Era with a provisional demarcation of the Quaternary at the end of the eraCite error: Invalid <ref> tag; invalid names, e.g. too many[33][34]

In descending order to oldest:

The current stratigraphic schema for the Cenozoic places the Quaternary at the end of the Neogene spanning a period of time beginning 2.6 million years ago or beginning 1.8 mya till the present time. However, the ICS has asterisked the Quaternary as ‘not yet decided’.[34] 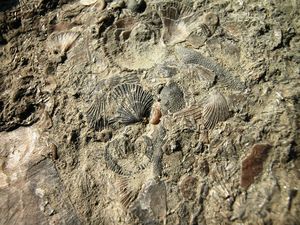