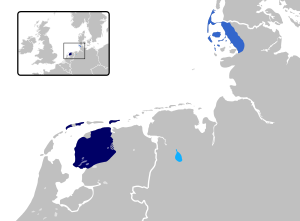 Frisian is a West Germanic language spoken in the Dutch province of Friesland (Fris. Fryslân) and in a few small areas in northern Germany.[1] It is commonly divided into three dialect areas:

The language is closely related to English and Dutch. Through long contact with Dutch, the West-Frisian dialects have adopted many elements from Dutch in syntax and vocabulary. East Frisian and North Frisian are endangered as the number of speakers has dwindled rapidly in the twentieth century.