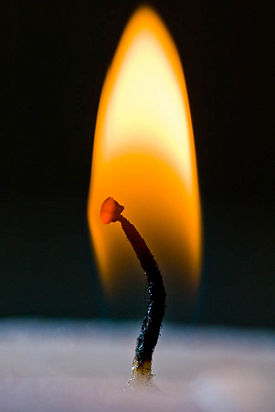 (CC) Photo: Jeremy Nixon.
Fire produced by a candle. The hotter parts of the flame are between the apex of the inner dark core and the tip due to convection(rising of heat) and airflow of oxygen.

Fire is the result, or side-effect, of an exothermal (heat-producing) chemical reaction between oxygen and a fuel source (wood, or gasoline, for example). In this reaction the energy produced is released in the form of heat. The typical events in the creation of fire are as follows:

In order for any fuel source to ignite from the presence of a heat source, it must reach its flash point, or the lowest temperature it can reach before becoming a combustible fuel-air mixture. The lower the flash point, the easier the fuel is to ignite. Because of this, all fires do not burn at the same temperature; some are hotter than others. The fire point is the temperature at which the fuel supports continuous burning[1] and is often a few degrees hotter than the flash point.

As long as all three properties of heat, oxygen, and fuel are present a fire will continue to burn. Removing any one of these elements will either remove the ability for a fire to start or will extinguish it.

Because fire is an observable effect, the varying properties can be identified. The height of the flame, for example, is usually dependant on the heat release rate of the fuel (the heat available or released(intensity) per square space, usually measured in Kw(Kilowatts) or Mw/sq.m.(Megawatts per square meter)) and the available oxygen consumption given the location of the fire.[2]

The color of fire can also be different depending on the type of fuel present in the reaction. Butane and Propane usually produce a blue hue when burning, whereas wood fires are usually yellow in color.

In the context of solids, liquids and gasses, fire or flame is mostly a gas, but one which has been ionized. In the volume of fire, gaseous CO2 and other compounds are raised into the air, along with the photons that emit light from the chemical reactions taking place. In different color fires, more oxygen exists in the reactions, speeding them up. This higher reaction rate produces an environment with a higher temperature, which means less compounds are rising into the air, and consequently less photons are being emitted.

Ultimately, what we see is the light produced from these reactions.

History of human use

It is hard to say when or where fire was first observed or discovered. Evidence from an excavation in the Benot Ya'aqov region of Israel have turned up burned fragments of flint and wood[3] that date from the Acheulian culture(1.8 mil. to 250,000 years ago), are some of the earliest available records of fire use in Eurasia. Evidence in the form of burnt bone in Africa was additionally discovered in 1986 when Bob Brain discovered a deposit approximately 6 meters thick in Swartkrans[4][5]. This finding possibly predated by a million years a discovery in Zhoukoudian, China, associated with Peking Man (H. erectus) circa 400,000 years ago[6]. Whenever it was actually discovered, fire was an integral part of human culture and survival. 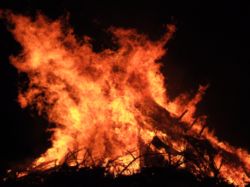 Fire. This bonfire was lit to celebrate Guy Fawkes Night, a British event held on November 5th. Fire is a part of human cultures all over the world.

Since its discovery, fire has always been considered a powerful force in the eyes of mankind. In early cultures and civilizations, fire was held in such a high regard that gods and goddesses were worshipped as flame keepers. In the Greek and Roman civilizations, Hephaestus (Roman name: Vulcan) was the god of fire and the forge, and his icons were the anvil and the forge. The Egyptians worshipped Ra, the god of the sun.

Fire also plays a big role in symbolism, often representing a state of destruction and rebirth, as in the case of the Egyptian Phoenix, a mythical bird that at the end of its life perishes by flame, and rises again from its own ashes. In many religions, candles are used throughout ceremonies as a symbol of light, and in the bible, God speaks Moses through a burning bush.

Additionally, fire can be an implement or a requisite as a part of a celebration. In the United States, gunpower and chemical-based charges known as fireworks are launched to commemorate its Independence Day.

Despite mankind's ability to harness the power of fire, it still remains a wildly destructive force, in the form of forest fires and fire emergencies. The energy produced by fire has a variety of uses in manufacturing and production, entertainment, and in research and development. However, this same energy has been the cause of natural disasters that accrued over $1 Billion USD in costs[7], making up as much as ten percent of the total natural disasters between 1980 and 2006[8]. Additionally, the impact that fires can have has resulted in major losses throughout the 19th-21st centuries[9]. A few of the deadlier fires in the U.S. included The Great 1906 San Francisco Earthquake and Fire, The Great Chicago Fire, Los Alamos Wildland Fire, and The MGM Grand Hotel Fire in Las Vegas.

In the event of these emergencies, Fire departments, branches of the military, and other "First Responder" agencies are set up to respond as quickly as possible to fires that threaten human life and property. Unfortunately, fires like the Zaca Fire in California, can be large enough [10]that they can make containment difficult in short periods of time. By the time the Zaca Fire was contained, over 240,000 acres had burned over a period of three months.

Due to the ubiquitousness of fire use, campaigns to educate people about fire safety have been developed. The United States Government operates a website, FireSafety.gov[11] that provides educational resources and reference materials for institutions and the public that illustrate key concepts in the prevention and handling of fires. Additionally, the slogan of "Stop, Drop, and Roll" is taught to young children as a part of fire safety[12]. The technique describes what to do in the event that a part of your person catches on fire: Stop all movement(moving may fan the flames or impair the ability of those attempting to help); Drop to the ground (optimally laying down), and Roll to extinguish the fire by depriving it of oxygen.

Psychology of Fire Use

The power of fire, from our first experiences as youth up until adulthood, has a mystical ability to draw mankind in. Because of its allure, fire safety and use are often stressed to us during childhood. However, fire play often occurs[13], and can possibly develop into the psychological addiction to fire known as pyromania, often when other social or psychological disorders are present.[14] Pyromania as a disorder is extremely rare, and may be difficult to confirm.[15][16] More commonly recognized is the arsonist, an individual who exhibits habitual fire-setting.