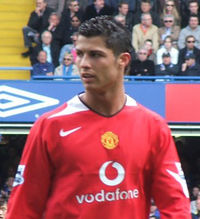 Cristiano Ronaldo dos Santos Aveiro (born 5 February 1985 in Funchal, Madeira), is a Portuguese professional footballer who, in 2018–19, plays as a forward for Juventus in Serie A and as captain of Portugal. His first professional club was Sporting Lisbon whom he joined a youth player in 1997. In 2002, still only 17, he graduated to Sporting's first team and played for them in the 2002–03 season. In August 2003, he joined Manchester United for a reported £12.24 million. In the same month, he made his international debut for Portugal in a 1–0 victory over Kazakhstan and, following a successful season in 2003–04, was included in the Portugal side that reached the final of the 2004 UEFA European Championship (Euro 2004), where they were defeated 1–0 by Greece.

Ronaldo was appointed captain of Portugal in 2008 and, a year later, joined Real Madrid for a then world record fee of £80 million (€94 million). He played for Real until 10 July 2018 when he signed a four-year contract with Juventus for a fee of €100 million. Ronaldo's most successful seasons were at Real where he scored 311 goals in 292 La Liga appearances and was a member of the Real teams that won the UEFA Champions League four times between 2013–14 and 2017–18. In international football, he led Portugal to the 2016 UEFA European Championship (Euro 2016) title; Portugal defeated the host nation France 1–0 in the final.