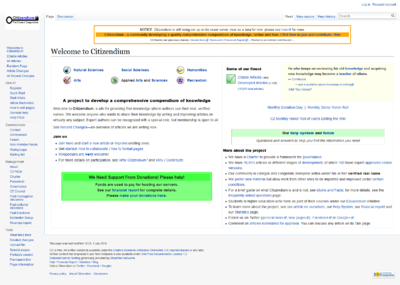 The Citizendium (si-tih-ZEN-dee-um, "a citizens' compendium") is a wiki-based free encyclopedia project founded in 2007 by Larry Sanger, who also co-founded Wikipedia. It allows users to write and edit articles on many subjects, as long as they register and edit under their real, verified name. Citizendium articles are released under a Creative Commons license that allows acknowledged duplication. We allow material from other wikis to be used with attribution. The project currently has 17,809 articles in varying stages of development.

A better summary is probably to be had here. We no longer are following the "expert guidance" model used in prior years.

The Citizendium is run according to a set of policies. The community itself, through consensus and discussion, is responsible for shaping the content of articles, as well as funding, appointments, and other administrative matters. In the past, members were elected or appointed to represent the project, make interim decisions and mediate disputes. At present, the wiki is operated by a small, dedicated group of volunteers.

Members of the project used to be called "Citizens" and were, at one time, divided into "Authors", who were regular project members, and "Editors", who were recognized experts. This model of operation was not successful, and now, all contributors are equal. Other roles include: the technical staff, who maintain the software and servers of the wiki; the Treasurer, who administers the project's finances; and the Editor in Chief and Assistant Editor, who may arbitrate controversies if it becomes necessary.

In contrast to the pseudonyms common on Wikipedia, Citizendium contributors believe the use of real names adds to the credibility and accuracy of Citizendium articles.

Some years ago, a (then) Editor could declare a version of an article essentially complete and of reasonably good quality. A copy of this approved version was made available, locked to further editing, on a subpage of the main article. The article itself remains freely editable and can later be re-approved and replace the citable version. At present, we are not creating any new Citable articles.

Citizendium currently lacks a written inclusion policy, so articles on subjects which many readers might consider obscure may be accepted. Debates about inclusion generally belong in Forum_Talk:Content but may also occur on the Discussion page of specific articles.