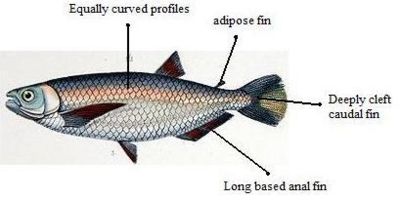 The characin family includes around 1,300 species, distributed across Central and South America, and Africa. Most of these fishes school in lakes and rivers.

Body shapes and sizes vary considerably, from 2 in (5 cm) long pencilfishes to the stocky African distichodus species, which measure 16 in (41 cm). Piranhas and pacus are muscular and heavily built to facilitate the tearing of flesh or fruits. Other characins , in contrast, may persistently eat aquarium plants. Characins have sharp teeth in the jaws and mos have an extra fin, known as the adipose fin, on the back. The family contains many popular fishes, including the tetras, of which the brilliant Neon and Cardinal Tetras are prime examples.

When compared with larger characins, such as the Pacu, the diminutive size of the smaller tetras illustrates the great range within the family Characidae. Temperaments, likewise, vary in the extreme, from the tranquility of the Neon Tetra to the ferocity of the Piranha. Native to South America and Africa, all characins make decorative additions to the aquarium - there are about 1,200 species in the wild. They have teeth in their jaws, unlike cyprinids. Many carry an additional small adipose fin behind the dorsal fin, although this is not an exclusive feature of characins (some other genera have it too, e.g., Corydoras catfish). Many smaller tetras are readily bred in soft waters, but very often the eggs are light sensitive.

While this article is titled "Monotypic", it is actually about any characin that does not fit neatly into other categories

While the smaller species of the characin group (see tetra) are more commonly kept in the aquarium, the species listed in this article section, belonging to related family groups, have equally strong claims for aquarium consideration. Hatchetfishes (Gasteropelecidae), pencilfishes (Anostomidae), and piranhas (Serrasalmidae) are all equally interesting to keep.