From Citizendium, the Citizens' Compendium
< Cattle
Jump to: navigation, search

As one of the longest-domesticated animals, cows and cattle have played a significant role within Western popular culture. Sometimes carrying the power of life-directing myth, and sometimes merely depicted so as to evoke a hearty belly laugh, they have been portrayed in art, nursery rhymes, language idioms, advertisements, and cartoons and comics since the early 1800s.

Cows in the myth of the American West

The Cow Puncher by Robert J. C. Stead[1]
Pete Cow Puncher: A Story of the Texas Plains by Joseph B. Ames

Hey Diddlle Diddle (The cow jumped over the moon) 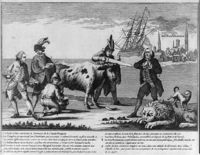 The fatted calf/kill the fatted calf
Until the cows come home
Cash cow
How now brown cow?
Holy cow
Have a cow
A sacred cow
Cow-punch
As awkward as a cow on roller skates

The Far Side
London's Times
The Man-Eating-Cow (Tick Comics) 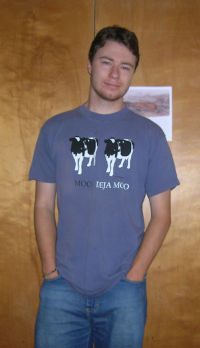 In 1983, Ben Cohen approached Vermont artist Woody Jackson about using Jackson's distinctive cow themed artwork as the hallmark of the fledgling Ben and Jerry's ice cream company.[1] The company has since grown to be a household name, operating around the world. The "Woody cow" remains a prominent part of the Ben and Jerry's brand.