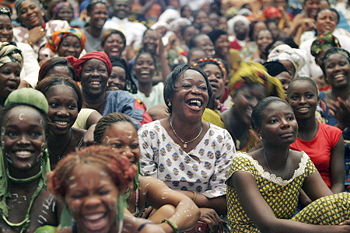 Once a colony of France, the West African state of Côte d'Ivoire (sometimes known as Ivory Coast[1]) is a centre of coffee and cocoa production, with Yamoussoukro its capital. Its neighbours are Ghana to the east; Liberia and Guinea to the west; Mali and Burkina Faso to the north; and its coastline meets the Atlantic Ocean.

From independence in 1960, the republic endured political unrest as its emerging economy expanded, culminating in a 1999 military coup, subsequent civil war and the displacement of hundreds of thousands of people, before all sides agreed a fragile truce in 2007. French and United Nations forces remain in the country to oversee the peace process. Voters elect a president and a parliament under a system of multiparty democracy; since 2000 the head of state has been President Laurent Gbagbo.

The population is about 21 million. Among Côte d'Ivoire's many peoples are the Akan, who comprise about 42%; the Voltaiques, or Gur (17.6%); the Northern Mandes (16.5%); the Krous (11%); and the Southern Mandes (10%). The official language is French, but the country is home to 77 indigenous languages, the largest being Baoulé (about 2.2 million speakers), and many more immigrant tongues. French is not widely spoken despite its important as the language of government.[2] Literacy stands at about half the population, and the majority of Ivoirians are either Muslims (the largest group, at about 39%) or Christians (33%).[3]

Côte d'Ivoire's total area is 322,463 sq km (124,502 sq mi), making it a little larger than New Mexico and more than 15 times the size of Wales. The climate is mostly tropical towards the coast and semi-arid elsewhere, with mountains to the north-west. Much natural forest has been logged. About 22% of the land is devoted to agriculture, and there are natural resources including petroleum, natural gas and diamonds. Coffee, cocoa and palm oil are the main products grown.[4]