Yos Sudarso Bay (Indonesian:Teluk Yos Sudarso), also known earlier as Humboldt Bay, is a small bay on the north coast of New Guinea, about 50 kilometers west of the border between Indonesia's province of Papua and the country of Papua New Guinea. The Indonesian provincial capital Jayapura is situated on the bay. 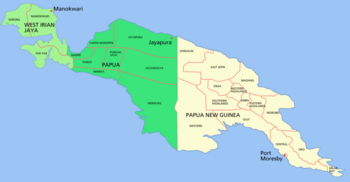 New Guinea. Click the map to see Jayapura and Yos Sudarso Bay. The bay is the unlabeled indentation northeast of the city, which is in the center of the north coast of the island.
Since the early 20th century, both the bay and the city have had several different names, often with varying English spellings.

In World War II Teluk Yos Sudarso was known as Humboldt Bay, and Jayapura was known as Hollandia. Occupied by the Japanese in April 1942, the area was liberated by U.S. forces on April 22, 1944, and became home to a massive U.S. naval base. It served as General Douglas MacArthur's headquarters until the conquest of the Philippines in March 1945.