This article is about "forking" of a software project into two or more different projects. For the operating system term for starting a new process, see fork (operating system) 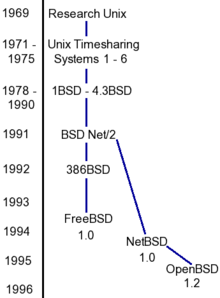 A fork of a computer software project is generally a version of the original software that makes use of the same (or a compatible) license, but with a development team that is usually under "new management." Forks usually occur when fundamental design differences can't be agreed upon.

Notable Forks in the History of Software development

UNIX History, also has a UNIX timeline with a detailed diagram listing forks from the original Unix