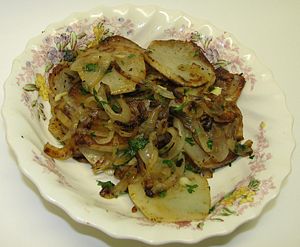 Lyonnaise potatoes or pommes à la lyonnaise[1] are a well-known dish of sliced potatoes and onions that apparently originated in France even though the cuisines of many other cultures also mix these two kitchen staples together. In French, à la lyonnaise means that the dish contains onions. There are a number of different ways of preparing this simple dish but to obtain the best results a certain amount of care must be taken. Many recipes instruct that the potatoes and onions be cooked together but this can easily lead to undercooked potatoes and overcooked onions; it is probably better to cook the onions and potatoes in separate steps, then to mix them together and give them an additional brief cooking before serving. They are generally cooked in butter and/or a mixture of butter and oil; both vegetables should be cooked until they are an appetizing golden brown; salt, pepper, chopped parsley, and perhaps a little chopped garlic are the only other ingredients. Rendered fat from ducks or geese can also be used instead of butter, and many recipes call for browning partially or wholly par-boiled slices of potato instead of raw slices.