James Hogg (1770-1835), known as the Ettrick Shepherd, was a Scottish poet and novelist. During his lifetime he was most famous for his poetical work The Queen's Wake, but modern readers and critics have taken more interest in his novel The Private Memoirs and Confessions of a Justified Sinner.

He was born in December 1770, at Ettrick in the Scottish Borders, the son of a farmer, who, when James was aged six, was obliged to leave his farms and take work as a shepherd. James had no formal schooling after the age of seven, and worked as a shepherd in various locations.[1]

Hogg's mother's family collected ballads, and around 1793 he began to write poems and ballads himself. His first collection of seven poems was published almost by accident in 1801, shortly before he first met Walter Scott, who was ballad-hunting. Other collections followed, and although Scott tried to dissuade him from writing, he also helped him to get published. Twice he lost his savings, putting them into agricultural ventures that failed. In 1810 he went to Edinburgh and started a weekly magazine The Spy, which ran for a year.[2]

The publication in 1813 of The Queen's Wake made Hogg's reputation. It was widely reviewed in England as well as Scotland. It went through six editions, in the third and fifth of which he made significant changes to the text. From then on he corresponded with some of the leading poets of the day.[3]

In 1815 the Duke of Buccleuch leased him Altrive farm virtually rent-free, and he spent the rest of his life in the Yarrow valley with frequent visits to Edinburgh. In 1817 he was involved in the launch of Blackwood's Edinburgh Magazine, for which he started the Chaldee Manuscript, a satire completed by J G Lockhart and John Wilson, which greatly increased the circulation. He continued to produce songs, satires and other poems, but in 1818 he produced his first prose fiction to be published as a separate volume.

Hogg had had several illegitimate children before marrying, in 1820, Margaret Phillips, a religious woman from a prosperous family. Very soon his wife's family suffered misfortune, and he ended up supporting his father-in-law. Around the same time he took on a second farm at Mount Benger, where there was arable farming, at which he proved inept. This eventually led to another financial disaster. Despite his earlier transgressions of the strict code, he became a kirk elder and even wrote a book of Lay Sermons.

From 1822 Blackwood's Magazine carried the series of Noctes Ambrosianae, imaginary conversations in which a representation of Hogg, the Ettrick Shepherd, was a central character. The deployment of this character enabled the use of vivid Scots dialect, but it has been denied that Hogg's own conversation in any way matched this. He was occasionally annoyed by the use made of this representation. He made his own, quite separate, contributions to periodical literature.

In 1832 he paid a visit to London, where publishers used his presence to promote his works. He died in 1835, possibly from liver disease. 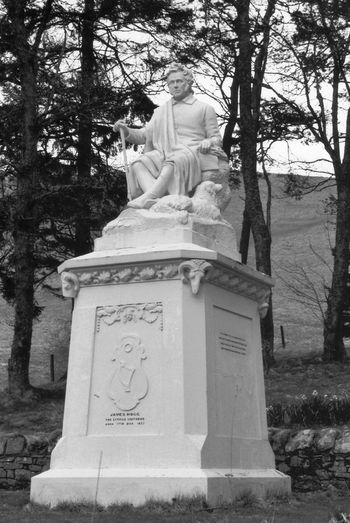 In reply to Scott's assertion that they were of the same school of poetry, Hogg said that Scott was king of the chivalry school, while he himself was king of the mountain and fairy school.[4] Neither school has retained either popularity or critical favour.

Hogg's principal poetical work was The Queen's Wake (1813), which took the form of a Bardic competition before Mary Queen of Scots. Two of the poems were originally written in Hogg's form of antique Scots, but were modernised in later editions. One of these was Kilmeny, which contemporaries considered his best poem.[5] Its reputation lasted long enough for it to be included in Quiller-Couch's Oxford Book of English Verse in 1900.

To modern eyes his most considerable work is The Private Memoirs and Confessions of a Justified Sinner (1824), a novel in which an outwardly religious man is induced to commit a series of murders by a mysterious person who may be interpreted as his alter ego.