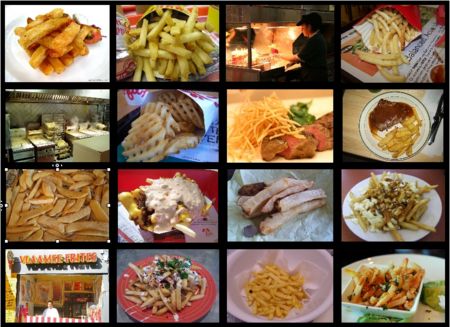 French fries, or french-fried potatoes, or simply fries, are generally thin sticks of potato that have been deep-fried. They are similar to the chips eaten in the United Kingdom, Ireland, and the Commonwealth (excluding Canada). In spite of the name, they were initially developed, not in France, but most likely in Belgium. They have spread globally to become an occasional treat of nearly all indigenous cuisines, each with its own unique flair. 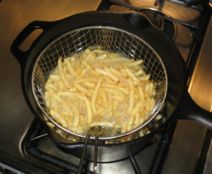 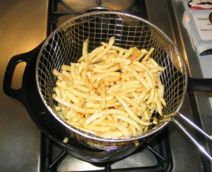 Most cooks who prepare french fries at home from non-frozen potatoes that they have cut themselves cook them during a single immersion in a generous amount of oil preheated to a temperature around 375°F (190°C) until they are golden and slightly crisp. Many restaurants, however, especially those known for their excellent french fries, cook them in two batches: the first at a temperature that varies from chef to chef but that is generally around 350°F (177°C), until the fries are nearly cooked but still limp and pale; the second, after the first batch has been removed from the oil and allowed to cool, at a higher temperature, generally around 375°F (190°C), until they are golden and crisp, which normally takes less than a minute. A third method, invented by the celebrated French chef Joël Robuchon for the home cook, is to put the sliced potatoes into a saucepan with just enough cold oil in it to cover the potatoes, then to cook them over high heat until golden, stirring occasionally.

During the initial discord between United States and France about the 2003 war in Iraq, the french fries in the three cafeterias of the United States House of Representatives were temporarily renamed "freedom fries".[1] 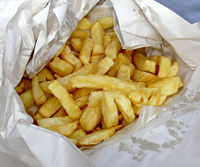