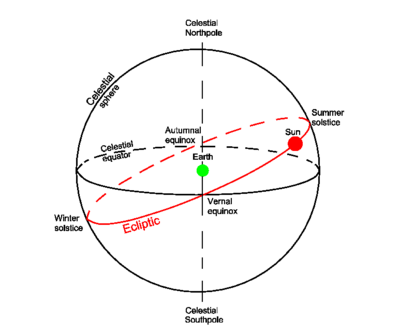 Fig. 2. The Earth in its orbit around the Sun. The arrow on the Earth indicates the angle between the Earth axis and the ecliptic plane; they also give the direction of the diurnal (daily) rotation of the Earth by the right-hand rule.

The Earth is the center of the celestial sphere and the celestial equator is a circle in the same plane as the equator of the Earth; the two equators are coplanar and concentric. The plane of the two equators (of the Earth and of the celestial sphere) makes an angle of approximately 23.43° = 23° 26' with the ecliptic plane; this angle is known as the obliquity of the ecliptic. In Fig. 2 one sees that the angle is the complement of the angle (66.57°) that the rotation axis (North-South axis) of the Earth makes with the ecliptic plane. The angle 66.57° is the latitude of the polar circles. (More precisely the latitude is: 66˚ 33' 38".)