Duke Nukem a platform game developed and published by Apogee Software. It is the first in the series of Duke Nukem games, and was released on 1st July 1991. The game was split into three episodes, and the first episode was released as shareware, whilst the second and third episodes required a purchase. 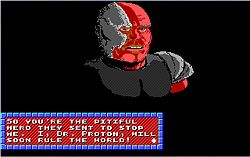 In the year 1997 a radiation accident had altered the Doctor Proton's brain. Fleeing to the underworld he created an army of robots, known as Techbots. Doctor Proton and his army of Techbots have now taken control of the largest city on Earth, Shrapnel City!

Duke Nukem has been hired by the CIA and is Earth's final chance to stop the crazed doctor. Armed only with his CIA prototype nuclear pistol, he is the one person why even stands a chance at success.

Episode one (Shrapnel City) takes place in the ruined city of Los Angeles. Nukem is to be flown in by aeroplane and dropped on top of a huge skyscraper. Nukem must find his way down and proceed to Dr. Proton's hideout, which is believed to be hidden deep underground. Episode two (Mission: Moonbase) sends Nukem to the moon to battle Dr. Proton as he plans his second assault on Earth. Finally episode three (Trapped in the Future!) sends Nukem into the future to stop Dr Proton from completing his maniacal plan to rule the world.

© Screenshot: Apogee Software
Duke Nukem must defeat a wide array of creatures in order to get through the level.

The player controls Duke Nukem as he works his way through a variety of levels. Nukem can be moved left and right, can jump and can fire his nuclear pistol. He can also activate elevators, teleporters and time machines; read notes and monitors; open doors; and use access cards, keys and other useful objects.

The action is shown as a 2D sideways view, which scrolls in all four directions. Scattered around each level are boxes of three colours. Blue boxes contain items which give points whilst red boxes contain food which restores health. The grey can contain a variety of things, either nothing; dynamite which must be quickly moved away from or it will hurt Nukem; a molecule which fully replenishes health; or a key item. There are three key items found within the game. The boots enable Nukem to jump higher, the robot glove is used to activate panels that need a hand print, and the grapling hooks allows Nukem to hang from certain types of ceiling. Once gained the key items are not lost, not even between levels or if lives are lost.

Nukem can defeat creatures by shooting them with his nuclear pistol, which can only be fired horizontally. At the beginning of the game only one shot can be on the screen at a time, however the gun can be upgraded over the course of the game to allow for up to five shots at a time.

In order to complete a level the player simply has to move to the exit door, however they may have to find keys to open other doors that are blocking the way. In between levels are small corridors that contain a sign on the wall giving a 'helpful' hint and the door to the next level. These corridors are the only place that players are able to save their game. Also, should the player have completed certain bonus tasks in the previous level the player will be awarded bonus points at this time. Examples of bonus task is collect the letters D, U, K and E in the correct order, destroying all of the security cameras on a level, and not loosing any health.

Nukem has eight health bars, and each time the character is hit by fire, spikes, robots or bullets one bar is lost. Soda cans replenish one bar and so do turkey legs, however if the turkey leg is shot before being collected it will double up to replenish two health bars. Should the player lose all of their health they will be sent back to the last corridor, or to the start of the level if they are on level one. 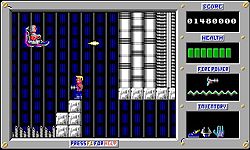 Whilst the correct original title for the game is Duke Nukem, it can often be seen credited as Duke Nukum. Some time after the original release Apogee became aware that in the TV series Captain Planet and the Planeteers one recurring villain was called Duke Nukem. Believing the name copyrighted they quickly changed the spelling of the title to Duke Nukum. Later they discovered that the original name was not copyrighted at all, so they copyrighted it for themselves and reverted to using the original name.

A number of cheats were included with the game. At any time, pressing the backspace and page down keys simultaneously would give the player a fully-powered weapon, full health and all of the keys. Also, the game could be started in cheat mode by passing the asp parameter when starting the game. If this was done then the player could at any point type 'GOD' in order to gain all the items, or 'GOW' in order to skip to the next level.