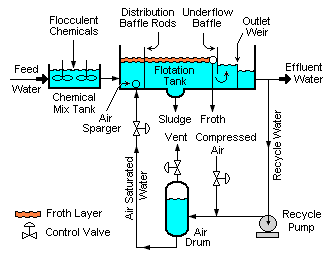 The feed water to the DAF flotation tank (also called the float tank] is often, but not always, first dosed with flocculent chemicals (such as ferric chloride or aluminum sulfate) to coagulate and flocculate the suspended matter.

A portion of the clarified effluent water leaving the DAF float tank is pumped into a small pressure vessel (called the air drum) into which compressed air is also introduced. This results in saturating the pressurized effluent water with air. The air-saturated water stream is recycled to the front of the float tank and flows through a pressure reduction control valve just as it enters the front of the float tank, which results in the air being released in the form of tiny bubbles. The bubbles adhere to the suspended matter, causing the suspended mater to float to the surface and form a froth layer which is then removed by a skimmer. The froth-free water exits the float tank as the clarified effluent from the DAF unit.[1]

A very similar process known as froth flotation is commonly used in the mining industries for processing of mineral ores.

Instead of a separate mixing tank for injection of the flocculating chemicals, some DAF units use lengthy, folded piping runs to provide the residence time for mixing and flocculation.

However, all of the DAF units have in common the use of air (or other gas) bubbles to separate the oil and any suspended solids from the water. In certain areas where environmental regulations require DAF units to be covered so as to reduce emissions of volatile organic chemicals (VOC),[5] an inert gas may be used rather than air to avoid formation of flammable conditions within the covered unit.