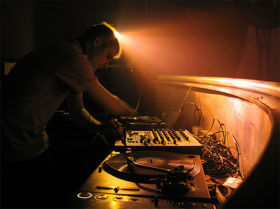 Disk jockey is a term for a variety of performers who make use of pre-recorded music (originally on disk-shaped media such as phonograph records or compact discs) for entertainment. The entertainment can be live, or broadcast over the radio, and the role of the Disk jockey can be actively creative (as with Hip-hop DJ's, who scratch and mix the pre-recorded material with a high degree of improvisation and dexterity), or relatively passive, as with a wedding Disk jockey who simply plays the requested music, with occasional pauses for announcements. The abbreviation "DJ," pronounced deejay, evolved early on for this term; in Hip-hop, performers prefixed these initials to their stage names (e.g. DJ Jazzy Jeff, or Kool DJ Herc).

The earliest use of the term was in radio, where it referred to the person who selected and played recorded music on disks. In the early days, this person was usually also the announcer, giving the name of the artist and song either before playing it, or afterwards (known as back-announcing). The announcer also read avertising copy for a show's sponsors, and complied with the requirements of the Federal Radio Commission, such as announcing the time and the station's call-letters at the top of the hour. Starting the 1950's, these radio DJ's often developed comical on-air personalities, linked to the content of their show, the sponsor, or both. For example, Pete "Mad Daddy" Myers, who hosted a rock-n-roll show on Cleveland's WHK in the 1950's, created the "Mad Daddy" character, who used his own trademark slang ("wavy gravy," "obla-di") to pitch the records he played as well as the show's sponsor, Record Rendezvous. Rock and R&B shows often sought out announcers whose speech embodied or imitated the popular slang of the music, particularly those with the characteristics of African-American intonation and delivery. In some cases, as with Vernon Winslow, a.k.a. "DJ Daddy-O," African-Americans were hired to coach white announcers.

The pay for radio DJ's in the classic period of the 1950's was usually very little; many depended on kickbacks from sponsors or record companies to make ends meet. In the case of the most successful DJ's, these extra payments could be quite handsome, but their exact role in how radio stations decided what material to play was the source of considerable controversy. The Payola scandals of this era ended the careers of many radio disk jockeys, including Allan Freed, who was credited with popularizing the term "rock 'n' roll."