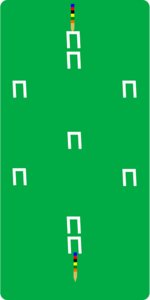 Diagram of how stakes and wickets are arranged on a croquet field. 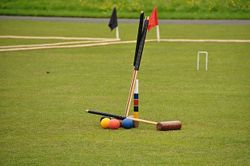 Croquet is a sport of uncertain origin, but it is believed to have been created in France and then imported to England, where it is most popular, and from there to the United States. The earliest known record of the name is dated 1856 and is contained in a set of rules for the game. It is played on a lawn, and the object is to be the first one to complete a course in which obstacles are set.

As a sport, croquet enjoys the distinction of not requiring strength, speed, agility or endurance. It is possible to play croquet wearing any kind of shoes, including high heels, and any kind of clothing, as long as one is able to bend over and reach the ground if needful. Helpful are steadiness of hand and eye, and perhaps judgement, tactics or strategy, and knowledge of the capabilities, temperament, and likely behavior of one's opponents. There are politics in croquet, too--under some circumstances, players can meddle with the ball of another player, hindering or helping that player's progress around the court. It is deemed by many to be an excellent family game, suitable for persons of almost any age and physical capacity.

One post serves as a starting point, and the other post the mid-way point. Play proceeds in a figure eight, counter-clockwise, around the court--wickets must be passed through in that exact order. If a player strikes a post with their ball, they are considered out of the game, so it is important not to strike either post until one's ball has passed through all wickets in the correct order. Each obstacle is a hoop through which the ball must pass in a prescribed order. The player hits the ball along the ground using a wooden mallet. The first player who first completes the course by moving the ball around the entire court, going through all the wickets in the correct order, and hitting the home stake, is declared the winner. Unlike in golf, there is no need for actual counting of strokes. Each player's mallet is marked with a color that matches that player's ball color.

Boasting is allowed in croquet, and may even be encouraged, as is jeering.