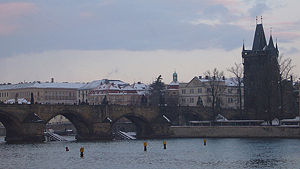 (CC) Photo: David Green
Charles Bridge as viewed from the left bank of the Vltava River.

Charles Bridge (in Czech: Karlův most) is a 14th century bridge that spans the river Vltava in Prague, the Czech Republic, and is the main route connecting Prague's Old Town to St. Vitus' Cathedral. It was once the only link between the two halves of Prague and in the centuries since has remained one of the city's most recognisable monuments. Commissioned by Charles IV to replace the Judith Bridge, it was designed by the court architect Peter Parler. Known as the the Prague or the Stone Bridge until the late nineteenth century, in 1870 it was officially named after its patron.

Occupying a central and strategic location in the heart of Prague, linking the seat of government to the commercial centres of the Old and New Towns, the Charles Bridge has been the site of many significant events in Czech history. Among them: the last battle of the Thirty Years' War in 1648, the defeat of the Prussians in 1744, and the front line between the revolutionaries and reactionaries in 1848.

Charles Bridge has previously allowed traffic and once had a tram line, however since 1950 the bridge is open to foot traffic only. The Baroque-era statues that line the bridge are copies of sandstone originals, which may be seen in the Lapidárium. Today it is one of the major tourist attractions of the city of Prague, and during the day is crowded with visitors and buskers. 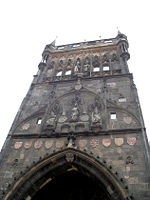 The first stone bridge that crossed the river Vltava was the Judith Bridge, named after Judith of Thuringia, wife of the then monarch Vladislav II. Technologically advanced for its time, it symbolised the ennoblement of the Přemyslid dynasty after the crowning of Vladislav II by Frederick of Barbarossa. The Judith Bridge was destroyed in 1342 by flooding, a significant demise to chroniclers of the day.[1] As well as holding symbolic significance, a permanent structure was required to facilitate commerce across both sides of Prague; it was inconceivable that such a central city should be without a bridge.

According to legend, the foundation stone of the new bridge was laid by Charles IV upon advice of astrologers to formally open the bridge on a palindromic date and time: 5:31 a.m. July 9, 1357 (the palindromic sequence being: 1357-9-7-531). During commemorative events celebrating the foundation of the bridge, the stone is again blessed at 5.31am every July 9th.

The left bank of the bridge joined with the remains of the Judith Bridge, which still remain today, and on the right bank was built the Old Town Bridge Gate (Staroměstská mostecká věž). The Bridge Gate's prominence and centrality meant that as well as a primary defensive structure, it was sculpted to make a major visual statement regarding the career of Charles IV.[2]

The sculptural detail of the Bridge Gate façade is dated from between 1374 to 1378, due to the heraldic shield of the Margravate of Brandenburg appearing (which was not added to the Czech crown until 1374) and the prominent position of Charles IV (died 1378) in the centre of the tower. The two figures at the top of the tower are St. Adalbert and St. Sigismund, significant figures in Bohemian statehood. The three figures at the centre of the tower are St. Wenceslas, Charles IV, and his son and heir to the throne Wenceslas IV. Underneath these monarchs lie the heraldic shields of the lands under the Czech crown at this time.