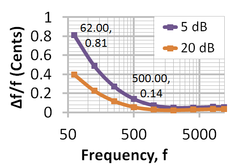 The figure at right indicates a smaller sound level difference is audible when the sounds are louder, and declines with frequency.[4]