Difference between revisions of "Candidiasis" 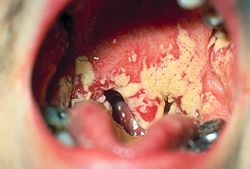 Thrush yeast infection in the mouth.

Candidiasis is an infectious disease caused by the fungus Candida albicans. The yeast Candida albicans is a common occupant of the human mouth, throat, and reproductive organs. This fungus does not cause harm or disease when in ecological balance with other microbes, however, many factors can cause C. albicans to grow rapidly so that it can not be controlled by the body’s defense systems, resulting in a thrush.

A thrush is a yeast infection characterized by white spots, usually on the tongue or inner cheeks, followed by and ulcer. In order to “survive” a thrush needs a weakened host and favorable conditions.It frequently causes no ill side effects except among infants and in AIDS patients due to their their weakened immune systems. In an individual who is immunocompromised, the infection can become severe and in time enter the blood stream. An infection in the bloodstream (sepsis) can affect the kidneys, heart, lungs, eyes, or other organs causing high fever, chills, anemia, and sometimes shock.Once candida enters the bloodstream, many organs may become affected.Candida can cause urine on the blood, murmurs in the heart, bloody sputum in the lungs, pain in the eyes, and seizures or impaired mental function in the brain.There have been cases where the fungus has invaded the respiratory system producing a bronchopulmonary infection, which can lead to damaging of the heart.

It has been discovered that the use of many types of antibiotics may make it easier for candiasis to develop by killing off normal microbes that usually fight off the fungus. Most candida infections can be treated at home with over the counter or prescription medication. These include topical administration of antifungal drugs such as clotrimazole (Femizole-7, Gyne-Lotrimin), miconazole, nystatin, or oral administration of drugs such as fluconazole (Diflucan) and amphotericin B. More serious infections may need IV medications given at the hospital.

Candidiasis of the skin is mostly found in moist areas and folds. People with a tendency to skin candidiasis should keep their skin dry. While some forms of candidiasis are easily curable, others are more unmanageable.