From Citizendium
< CZ:Featured article
Revision as of 15:19, 11 September 2020 by John Stephenson (Talk | contribs) (template)
(diff) ← Older revision | Latest revision (diff) | Newer revision → (diff)
Jump to: navigation, search
Bear with me, 0 mystery of existence, as I pluck the occasional thread from your train.


— Wislawa Szymborska, from her poem, "Under One Small Star" 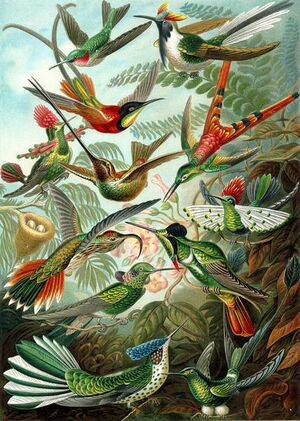 (PD) Image: Ernst Haeckel
Buzz of Life: One aspect of the interrelations among living entities. Researchers begin to understand the mechanisms governing the complex network interactions between plants and pollinators, such as hummingbirds, shown in this illustration from Ernst Haeckel's Kunstformen der Natur (1904).[1]

The typical form of the question asked: "What Is Life?"

At any given time in history, the prevailing answers to that perennial question depended on the prevailing extent of human knowledge, and to the cultural interpretations given that knowledge, including those arising from belief systems based on myth and religion-inspired faith. At this writing, in mid-second decade of the 21st century, that still remains the case.[2]