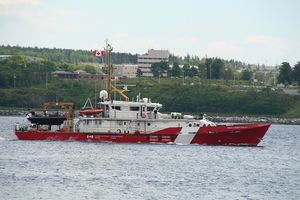 The CCGS Private Robertson a sister ship to the Corporal Teather.

CCGS Corporal Teather C.V. is the third of nine vessel in the Canadian Coast Guard's Hero-class patrol vessels.[1] She was delivered to the Coast Guard in February 2013.

The vessel is named after Robert Gordon Teather, a 30 year veteran of the Royal Canadian Mounted Police.[4][5]